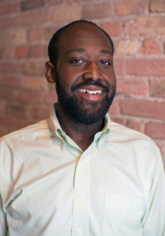 Keron is an organizer with ten years of experience working for social change and he most recently served as the Membership Director for United Working Families in Chicago. He was also the Field Director for Raise Illinois, a statewide campaign to raise Illinois' minimum wage, and for Illinois Unites for Marriage, the campaign that secured the freedom to marry for gay couples in Illinois.

Keron has been a trainer and campaign strategist for the Midwest Academy, where he worked with groups at the city, state and national levels to design and implement strategic campaigns on a wide set of issues, including public education. In 2008 Keron began a three-year position as the director of Interfaith Worker Justice in New Orleans, helping to build local coalitions to strengthen rights for workers.