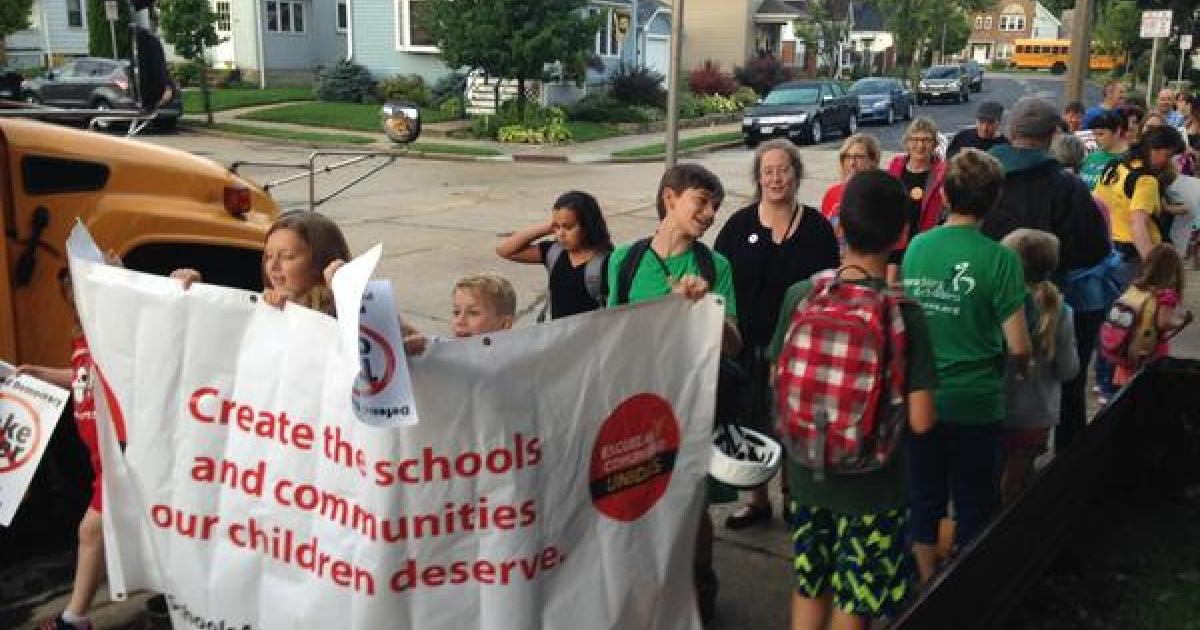 The Alliance to Reclaim Our Schools Newsletter
September 18, 2015

Welcome to our September 18 newsletter! Share the latest from your city or state with us on Twitter and Facebook. Don't forget to tell your friends and colleagues to sign up for our newsletter here. 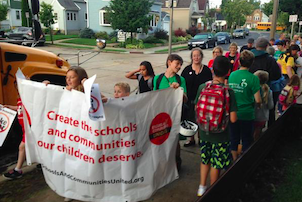 MILWAUKEE & LA CROSSE
Today, thousands of parents, students, educators and community leaders are holding "walk-ins" to show their support for public schools and to protest a law that allows the state to takeover and privatize schools. Hosted by Schools and Communities United and the Milwaukee Teachers' Education Association, the walk-ins are taking place at 105 Milwaukee schools and throughout the entire La Crosse School District. Follow the action on social media with #NoMPSTakeover. More details are available here and here.

What's at stake with the takeovers? Read our recent report, "Out of Control," to learn how school takeovers disenfranchise communities of color and pave the way for the privatization of public education.

CHICAGO
Alliance to Reclaim Our Schools Director Keron Blair published a powerful op-ed in the Chicago Tribune this week, highlighting the ongoing struggle to win a sustainable community school in Chicago. Keron offers a meaningful description of community schools and asks, "Are they worth dying for?" With 15 Chicago parents, teachers and community members on their 4th week of a hunger strike for Dyett High School, Keron suggests that the fight for Dyett is a call to action for all who care about education justice. Read his op-ed here.

Kyle Serrette of the Center for Popular Democracy, an AROS partner, also published a great column in support of the hunger strikers and their vision for Dyett. Read his op-ed here.

SEATTLE
After a 5-day strike that delayed the start of the school year, teachers in Seattle won a new contract deal with the district on Wednesday. Like recent teacher strikes in Chicago and St. Paul, MN, the Seattle teachers conducted outreach to the local community to make their strike about far more than pay raises. The new contract addresses issues like discriminatory school discipline, the proliferation of high-stakes testing, and the need for smaller, more manageable case loads for school specialists. Read more about this powerful new organizing strategy here. 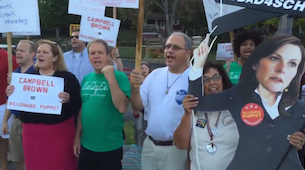 Protesters at the NY event. Picture via NYSUT.

NEW YORK
Nearly 200 teachers and community members with the Alliance for Quality Education and NYSUT gathered in upstate New York on Wednesday to protest Campbell Brown, the keynote speaker at the annual gathering of the Business Council of New York State. Brown has been leading the charge in New York against teacher tenure, promoting a divisive brand of education "reform" that scapegoats teachers for the systemic inequities in our nation's public schools. Read more here.

Also in New York: Desis Rising Up and Moving released a powerful statement connecting this week's national story about Ahmed Mohamed, the 14-year-old student arrested for bringing a homemade clock to school, to the national fight for school discipline reform.

LITTLE ROCK
Nine months after the Arkansas Board of Education took control of Little Rock School District, local education justice organizers held a mock wake on Wednesday to protest the loss of democratic control of their schools. The event was organized by Reclaim Our Little Rock Public Schools, and protesters brought seven tombstones to district headquarters to symbolize the seven seats of the elected school board, which was disbanded following the state takeover. Read more about the event here and here.

PITTSBURGH
After several years spent building a strong community coalition and winning seats on the school board, Great Public Schools Pittsburgh is leading the fight to ensure the board retains the right to select the district's next superintendent. Read this commentary from One Pittsburgh's Erin Kramer for an inspiring look at grassroots organizing for education justice in Pittsburgh. Read more about the superintendent search here. 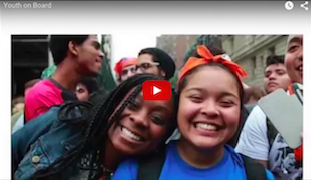 Click here to watch the video and
vote for Youth on Board!

BOSTON
Youth on Board has been nominated for a $100,000 award for their work around student voice and school discipline reform. They need your help to win the prize! Click here to vote for Youth on Board, and don't miss this great video highlighting what these student organizers have accomplished over the years.

PHILADELPHIA
This week, the Philadelphia Student Union published a must-read reflection on how the education "reform" lessons of post-Katrina New Orleans are being applied to schools in Philadelphia and across the country. Through the systemic underfunding of public schools, policymakers have engineered a fiscal "crisis" that, like the natural disaster that opened the door to school privatizers in New Orleans, endangers public education in every community. Read PSU's commentary here.