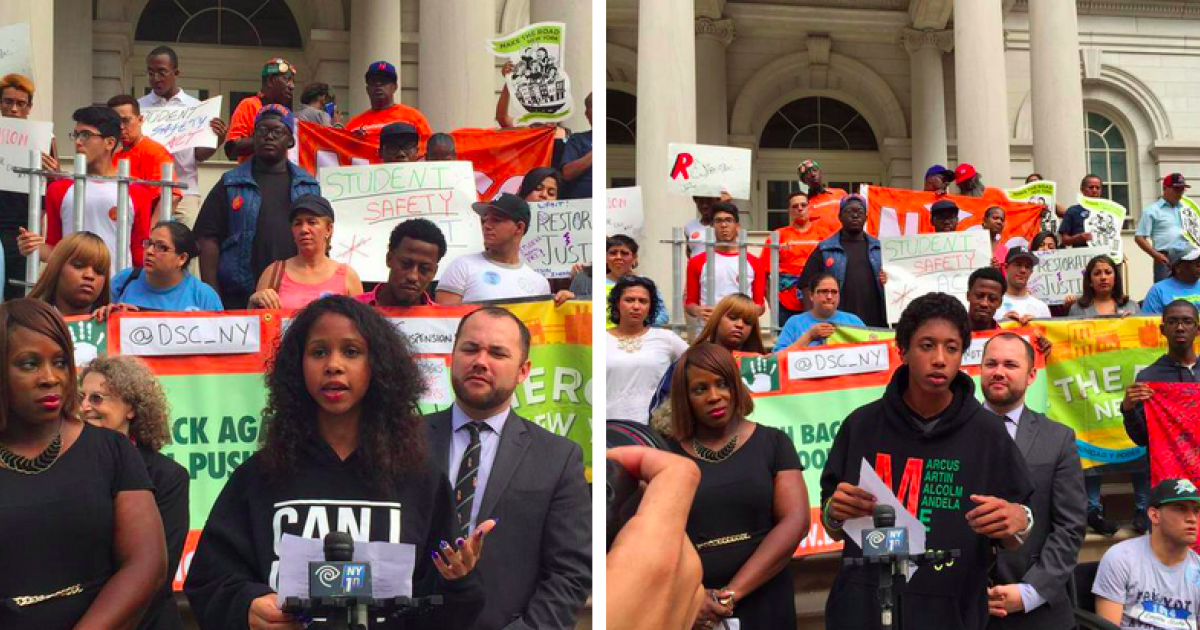 The Alliance to Reclaim Our Schools Newsletter
October 2, 2015

Our thoughts and prayers today are with to the victims of the Umpqua Community College shooting. As the fight for education justice continues, share the latest from your city or state with us on Twitter and Facebook. Don't forget to tell your friends and colleagues to sign up for our newsletter here.

Members of Make the Road NY speak at a rally to
support the Student Safety Act amedment.
Picture via Urban Youth Collaborative.

NEW YORK CITY
Thanks to years of hard work led by NYC youth organizers, the City Council passed an amendment to the 2011 Student Safety Act on Wednesday. The new legislation requires education officials and police to publish public data on school discipline, which will help combat harsh, discriminatory discipline policies across the city. Read more here, and check out #StudentSafetyAct for some great pictures.

Also in New York City: Parents and community members protested this week against a television ad by the pro-charter group Families for Excellent Schools that uses race-baiting tactics to attack Mayor Bill de Blasio and push a school privatization agenda. FES will reportedly spend several million dollars promoting the ad in the coming weeks. Read more about the ad here, and sign this petition telling FES to take down their ad. 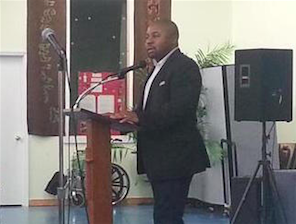 NEW ORLEANS
Representatives from the Alliance to Reclaim Our Schools will be joining parents, students, educators and community members in New Orleans this weekend for Advancing Racial Justice in 2015: How Communities and Labor Can Organize Together. The conference will unite advocates and organizers from four national movements, including education, immigration and criminal justice reform and the fight for a living wage. Click here for more details, and follow #Justice2015 and for live updates and pictures!

Also in New Orleans: Gina Womack, Executive Director of Families and Friends of Louisiana's Incarcerated Children, published a powerful op-ed on Thursday in The Louisiana Weekly. She urged her state to "cut the school-to-prison pipeline off at the source" by banning harsh school discipline policies and providing more support for struggling students. Read her op-ed here.

NATIONAL
This week, the Dignity in Schools Campaign responded to U.S. Secretary of Education Arne Duncan's call to shift funding from the criminal justice system to our nation's public schools. DSC applauded Duncan's speech, but said the investment must go further to support positive discipline alternatives like restorative justice. Read their statement here, and click here for details on DSC's upcoming National Week of Action Against School Pushout. 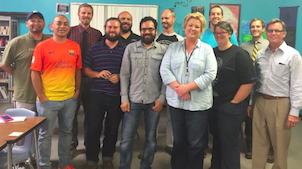 The MAAC teachers fighting to unionize.
Picture via Cheryl Coney.

CHULA VISTA, CA
Teachers at MAAC Community Charter School are the latest in San Diego County to join the fight to unionize. After determining that forming a union would better help them build strong, supportive learning environments for their students and advocate for them, the teachers filed a petition to begin the unionization process in August, which was accepted by the state on September 21.

CHICAGO
On Tuesday, the parents and community member who led a 34-day hunger strike in Chicago held a rally to celebrate their victory. They successfully pushed Mayor Rahm Emanuel to reopen Dyett High School, and the organizers are now shifting their focus to the fight for an elected school board. Follow #ERSB for the latest news and pictures.

NATIONAL
Despite overwhelming evidence of the misuse of over $3 billion in federal funds awarded to charter schools, the U.S. Department of Education announced a further $157 million will go to fund the expansion of charter schools nationwide. The Department awards grants to its state-level counterparts to distribute, but there are few oversight systems in place, resulting in rampant waste, fraud and abuse. To understand just how widespread the problem is, read this feature from The Washington Post that draws on investigative reporting from the Center for Media and Democracy.

Oct. 8: The Philadelphia Student Union is celebrating 20 years of student organizing in the fight for educational justice. Join them for their anniversary party! Details here.