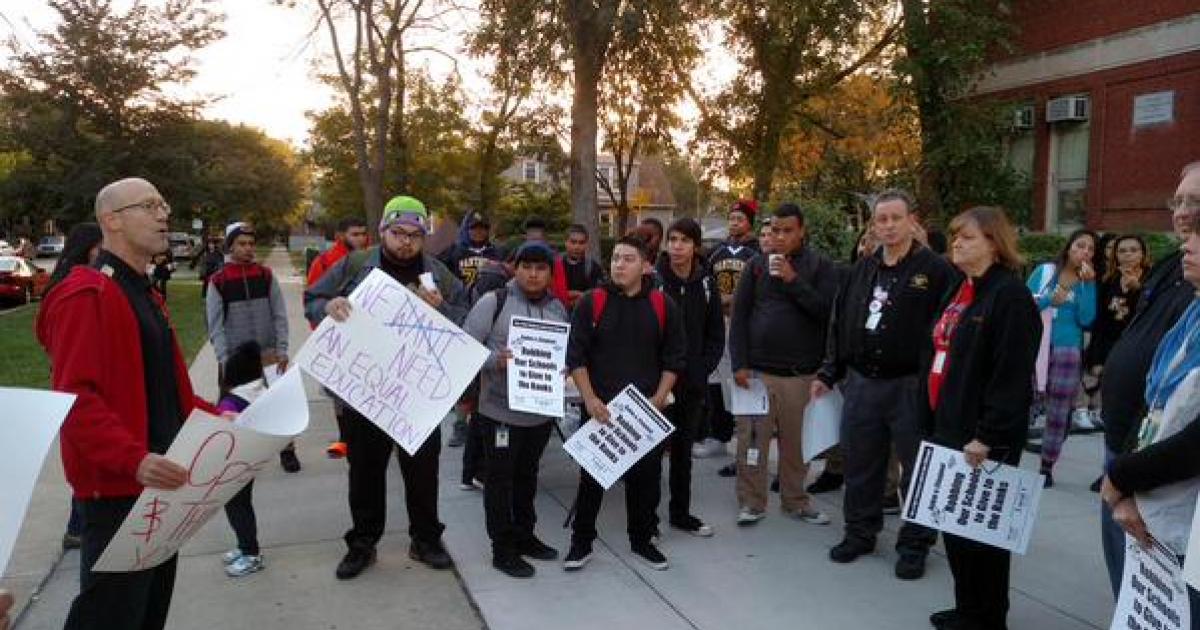 The Alliance to Reclaim Our Schools Newsletter
October 16, 2015

Welcome to our October 16 newsletter! Share the latest from your city or state with us on Twitter and Facebook. Don't forget to tell your friends and colleagues to sign up for our newsletter here. 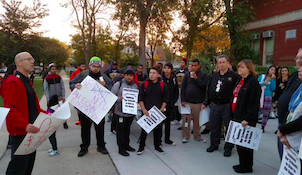 A Chicago teacher speaks at a walk-in at Kelvyn
Park High School. Picture via Jackson Potter.

CHICAGO
Following the lead of organizers in St. Paul and Milwaukee, the Chicago Teachers Union joined with students, parents and community members across the city to hold a half dozen walk-ins on Thursday morning. The walk-ins included rallies before the school day started followed by marches into the school building in support of public education. Chicago is fighting draconian cuts to its public school budget while, simultaneously, an increasing amount of funding is being funneled to charter schools. Check out more pictures from the walk-ins on Twitter with #Walkin4Justice.

PHILADELPHIA
On Thursday, members of the Philadelphia Federation of Teachers gathered at School District Headquarters with parents from Cooke, Wister and Huey Elementary Schools to speak out against the District's plan to convert the schools into charters. Speakers at the rally, including PFT President Jerry Jordan, called for Philadelphia to instead adopt the community school model, which offers wraparound support services for students and their families and has successfully improved public schools in cities like Chicago, Cincinnati, St. Paul and Austin. Jordan also testified at last night's School Reform Commission hearing. Read his testimony here.

Also in Pennsylvania: The Atlantic published an important article this week highlighting the looming funding crisis for schools across Pennsylvania due to the state legislature's inability to pass a budget and adopt a formula for distributing funds to the schools most in need of resources.

The Joint Committee on Education held a hearing
on charter school expansion in Massachusetts.
Picture via MA Jobs with Justice.

MASSACHUSETTS
Governor Charlie Baker is pushing to lift the cap on the number of charter schools in Massachusetts. A hearing at the State House on Tuesday attracted hundreds of charter school parents and teachers and just as many opponents of lifting the cap. The legislature's Joint Committee on Education heard testimony from more than 50 witnesses over the course of the 8-hour hearing. Witnesses against lifting the cap included a panel of four students from Youth On Board and representatives from the state teachers' union and the Massachusetts Education Justice Alliance. Karran Harper Royal from New Orleans and Leigh Dingerson with the Annenberg Institute for School Reform also testified on Tuesday and at a Wednesday morning briefing for senators, representatives and their staffs. Read more here and here.

NEW YORK
Representatives from the Alliance for Quality Education and a panel of parents and grandparents testified at a State Assembly hearing on Wednesday to warn against legislation that puts struggling schools under state receivership. AQE and its allies argued that the legislation is inadequate due to lack of long-term funding and a rushed timeline for improvement. Instead, they want to see struggling schools converted into community schools with strong wraparound supports for students and programs like restorative justice. Read more here and here.

CINCINNATI
New opponents keep lining up in Ohio to push back against a $71 million federal grant from the U.S. Department of Education to support the growth of charter schools in the state. This week, the Cincinnati Educational Justice Coalition released a letter to Secretary of Education Arne Duncan expressing their disappointment that the DOE would continue to support an industry rife with corruption and profiteering at the expense of Ohio's public school students. Read the letter here.

LOS ANGELES
United Teachers Los Angeles is building a strong labor coalition to fight a plan to double the number of students enrolled in charter schools in the city. UTLA has forged an alliance with SEIU Local 99 and other unions representing administrators, police officers, clerical workers and other school personnel. On Tuesday, the Los Angeles County Federation of Labor joined UTLA for a presentation to the Board of Education while around 200 teachers rallied outside. Read more here.