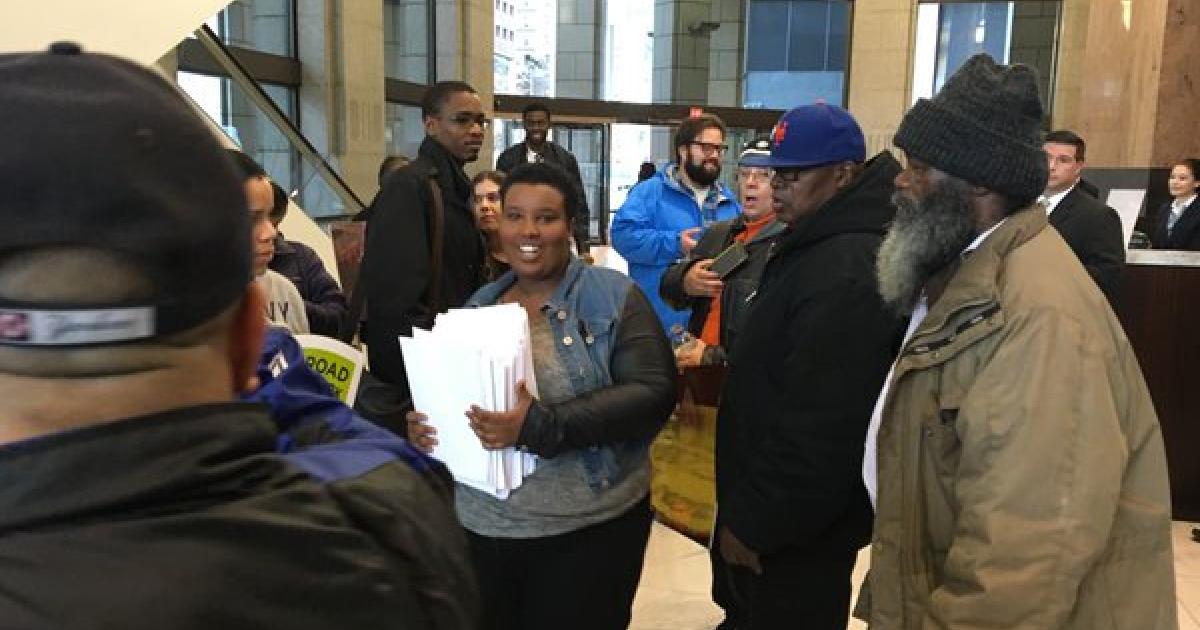 The Alliance to Reclaim Our Schools Newsletter
November 20, 2015

Welcome to our November 20 newsletter! We'll be on hiatus next week, so look for our next newsletter in December. In the meantime, share the latest stories from your city or state with us on Twitter and Facebook. Don't forget to tell your friends and colleagues to sign up for our newsletter here. 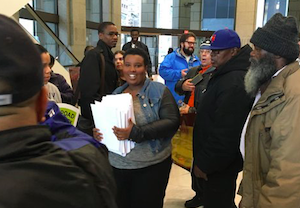 Fatima Geidi delivers the "got to go" petition.
Picture via @BEastonNY.

NEW YORK CITY
On Thursday, former Success Academy parent Fatima Geidi delivered a petition she started calling on the U.S. Department of Education to investigate the charter school chain for keeping a "got to go" list of struggling students and actively working to push them out of school. The petition was backed by the Alliance for Quality Education and the Urban Youth Collaborative and signed by more than 35,000 people. Read more here.

MASSACHUSETTS
On Thursday, Raise Up Massachusetts submitted over 155,000 signatures in support of a ballot initiative to institute a millionaire's tax to raise funding for K-12 public schools, higher education and transportation. The signatures are the first step towards putting the initiative on the November 2018 ballot and they coincide with recent recommendations from the state's Foundation Budget Review Commission to invest an additional $568 million in the state's public schools. Read more about the ballot initiative campaign here.

CHICAGO
In recent weeks, Chicago students led several protests focused on the ongoing state budget fight and the dire need for more funding for the city's public schools. On November 6, around 500 students staged a sit-in at the state government building. Then on November 13, students protested school budget cuts and the "toxic swaps" that have devastated the city's school funding. Watch some great news footage of the sit-in here, and check-out more pictures on Twitter with #FundOurFutureNow.

Also in Chicago: As part of the growing national movement to unite labor and community groups in the fight for public education, the Chicago Teachers Union has invited community organizations to participate in the bargaining process for its next contract. Many of the community groups involved are part of the Alliance to Reclaim Our Schools network and the Grassroots Education Movement. Read their proposed demands for the contract here. 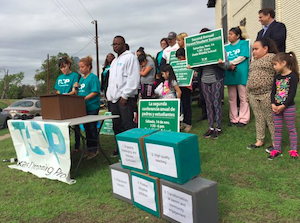 DALLAS
The Texas Organizing Project held a press conference and summit last week to showcase the impact of their community school initiative at Billy Earl Dade Middle School in Dallas and to build support for the model as a way to win the schools all children deserve. The group is focused on securing key academic resources such as a challenging curriculum, high quality teaching, and positive discipline practices, as well as wraparound supports and strong community engagement. Read more here and here.

MISSISSIPPI
The Schott Foundation for Public Education and the Southern Education Foundation released a powerful statement this week reflecting on the inspiring organizing work behind Initiative 42, the ballot initiative to secure fair funding for Mississippi schools. Though the campaign was defeated at the ballot box earlier this month, it has still created a strong grassroots movement that will continue to fight for fair school funding. Read the statement here. 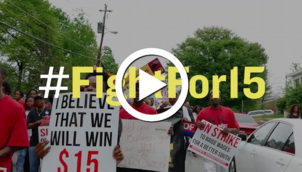 Watch our video supporting the Fight for $15!

NATIONAL
In case you missed it, the Alliance to Reclaim Our Schools released a video in support of Fight for $15's National Day of Action on November 10. As parents, teachers, students and community members, we know that to win the schools all our children deserve we must take the fight beyond the classroom and lift families and communities out of poverty. We are proud to stand with Fight for $15 in calling for a living wage and the right to join a union. Watch our video here.

NATIONAL
Over 500,000 public school students across the country opted out of standardized tests in 2015. The half-million mark is a milestone in the national fight to push back against the overuse and misuse of standardized testing. The opt-out movement has started to push policymakers to roll back testing requirements and consider alternative, more holistic assessments of student achievement. You can read more from Fair Test, including state-level opt-out numbers, here.

Dec. 5: Schools and Communities United will lead a citywide convening to discuss the future of Milwaukee Public Schools and how to organize around the community schools model. Click here for details.

Dec. 12: The Coalition for Educational Justice will host a Parent Power School event to explore the impact of race on education policy issues like school funding, standardized testing and school discipline. Click here for details.