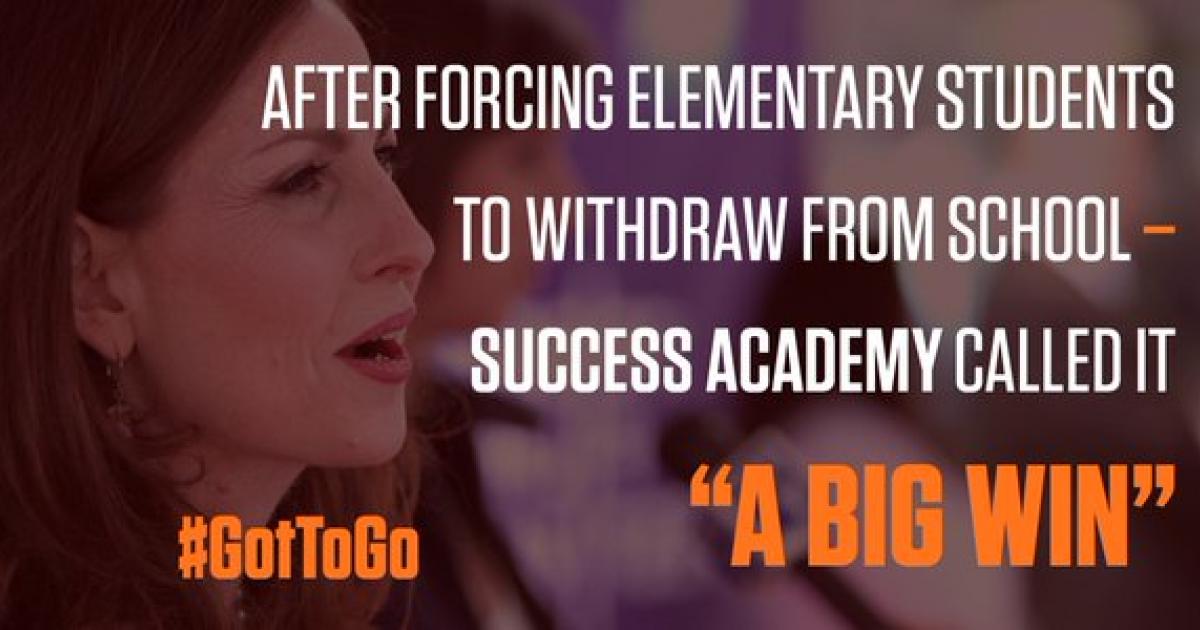 The Alliance to Reclaim Our Schools Newsletter
SPECIAL EDITION: November 13, 2015

Welcome to our November 13 newsletter! This week we're paying special attention to the ongoing scandal surrounding Success Academy Charter Schools in New York City and the fight to end the school-to-prison pipeline.

We'll be back next week with news from across the country, so share the latest stories from your city or state with us on Twitter and Facebook. Don't forget to tell your friends and colleagues to sign up for our newsletter here.

Sign the petition to call for a federal investigation
into Success Academy for its "got to go" list.
Picture via @AQE_NY.

NEW YORK CITY
Success Academy Charter Schools in New York City are awash in scandal after a recent New York Times investigation revealed one school kept a "got to go" list of struggling students and actively worked to push them out of school.

The investigation has provided more fuel for the national debate over how charter schools use suspensions, expulsions and other harsh disciplinary practices to weed out students who need extra support and, in so doing, boost the schools' test scores.

Success Academy schools suspend students at almost 3 times the rate of the city's regular public schools. Eva Moskowitz, founder of the charter school chain, recently appeared on PBS News Hour to defend the practice of suspending students as young as kindergarten and first grade. The New York Times investigation highlighted a principal who uses the threat of 911 calls to encourage parents to withdraw their students.

Harsh school discipline policies like these are feeding the school-to-prison pipeline and disproportionately hurt students of color, students with disabilities and LGBTQ students. It's time to fight back.

Over 30,000 people have signed a petition calling on the U.S. Department of Education to open a civil rights investigation into Success Academy Charter Schools, which have received $37 million in federal funds since 2010.

The petition was started by New York City parent Fatima Geidi, whose 10-year-old son, Jamir, has special needs but faced repeated suspensions at Success Academy. Now backed by the Alliance for Quality Education and the Urban Youth Collaborative, the petition will be delivered to the U.S. Secretary of Education Arne Duncan on November 18.

Click here to sign the petition! Then please share it with your friends and colleagues on social media. Let's turn this petition into a movement for school discipline reform!