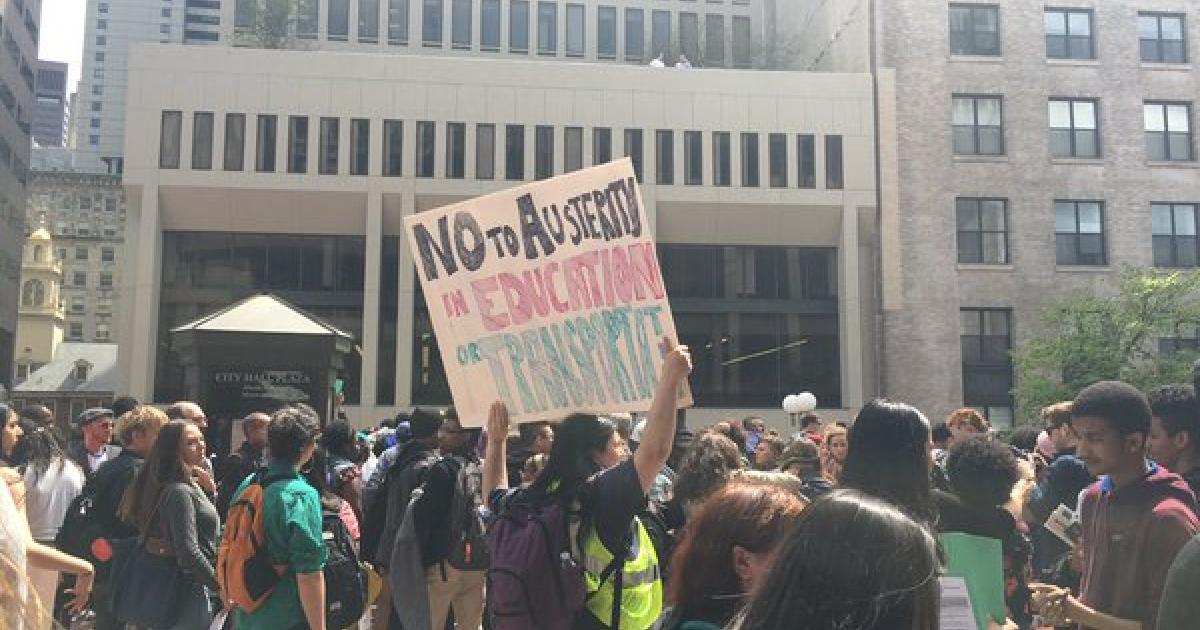 The Alliance to Reclaim Our Schools Newsletter
May 20, 2016

Welcome to our May 20 newsletter! As always, share the latest stories from your city or state with us on Twitter and Facebook. Don't forget to tell your friends and colleagues to sign up for our newsletter here. 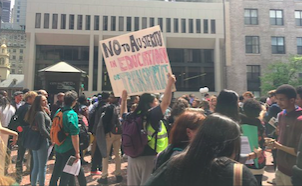 Boston students gather for a rally after walking
out of class. Picture via the Schott Foundation.

BOSTON STUDENT WALK-OUT
More than a thousand Boston students walked out of their classes on Tuesday to protest a school budget shortfall that will hurt the city's high schools, special education students and early learning centers. After walking out, the students gathered at City Hall for a rally before packing a City Council hearing on the school district budget. This is the second time this spring that Boston students organized a massive demonstration to protest budget cuts; in early March, thousands of students walked out of school in a move that forced the district to make some concessions to protect high schools from the worst of the cuts. Read more about the Tuesday event here, here and here.

PHILADELPHIA STUDENT ATTACKED BY SCHOOL POLICE
On May 5, a member of the Philadelphia Student Union was assaulted by a school police officer at Benjamin Franklin High School. The incident began as a simple dispute over whether the student, Brian Burney, had a hall pass to use the bathroom and ended with the officer punching him and putting him in a chokehold on the floor. This kind of violent behavior from school police officers is unacceptable and contributes to the criminalization of students of color in our nation's schools. PSU has a statement with more details about the assault here. Members of the City Council also issued a letter this week to the city's School Reform Commission and superintendent calling for an investigation into the incident and for details about how the district trains officers to interact with students. 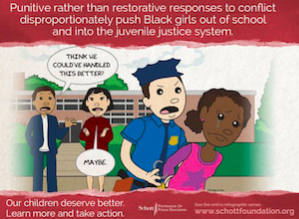 INFOGRAPHIC: THE BARRIERS FACING GIRLS OF COLOR
The Schott Foundation for Public Education released a new infographic this week illustrating the barriers facing young women of color in our nation's schools and communities. From unfair school discipline practices and lack of educational resources to high rates of exposure to sexual harassment and greater familial responsibilities, this graphic paints a powerful image of how schools are failing to meet the needs of girls of color. View and download the infographic here.

NEW YORK PETITION
Nearly 20 community, civil rights and education advocacy groups launched a petition this week to push back against a media campaign that is criminalizing students of color in New York City public schools. The "Safe Schools Now" campaign, which is run by Families for Excellent Schools, is furthering a narrative that paints students of color as violent in order to justify harsh, discriminatory discipline practices. Instead schools should be working to implement restorative justice approaches that support students and build trust among all members of the school community. The Alliance for Quality Education has more details in their press release, and you can add your name to the petition here.

PITTSBURGH
This summer, Pittsburgh Public Schools will welcome a new superintendent, Dr. Anthony Hamlet, who was chosen to lead the city’s schools through a selection process that involved an unprecedented level of input from parents, students and community members. Great Public Schools Pittsburgh (a local education organizing group and AROS ally) considers the new superintendent to be a promising hire. In a statement they said, “We believe that Dr. Hamlet’s experience in leading school transformations and his commitment to closing all achievement gaps well qualify him to help lead Pittsburgh’s Community Schools effort.” Read more about Pittsburgh’s new superintendent here.