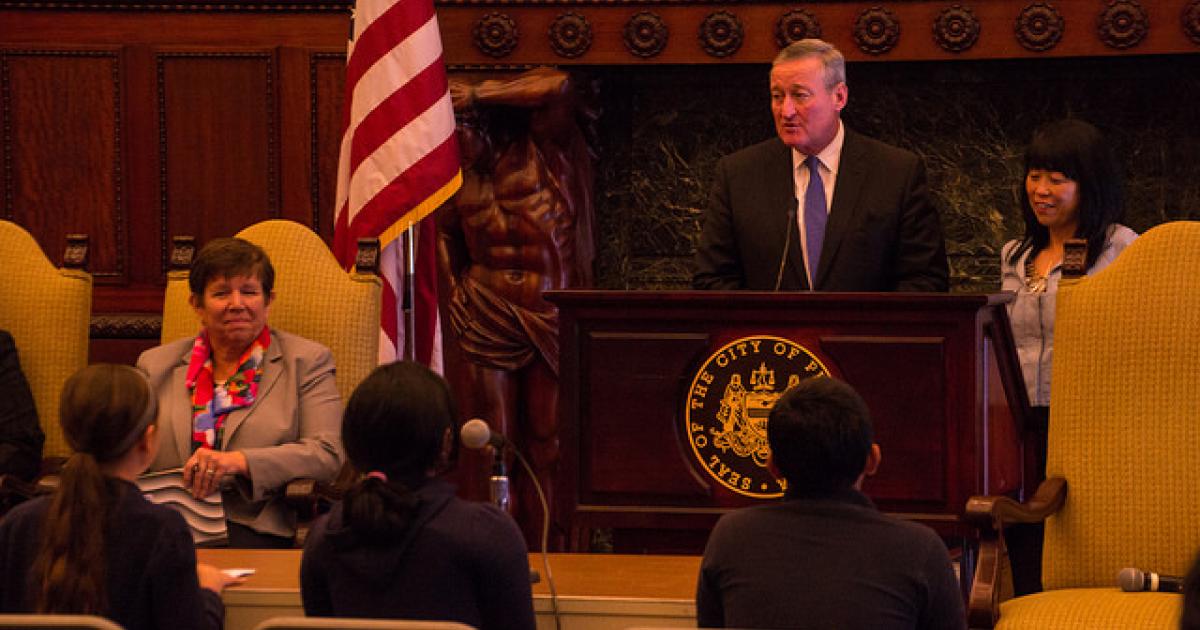 The Alliance to Reclaim Our Schools Newsletter
May 13, 2016

Welcome to our May 13 newsletter! As always, share the latest stories from your city or state with us on Twitter and Facebook. Don't forget to tell your friends and colleagues to sign up for our newsletter here. 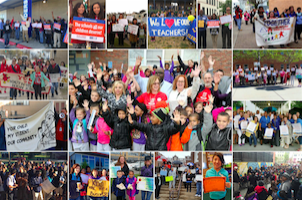 View more pictures and news clips
from the May 4 walk-ins here.

RECAPPING THE MAY 4 WALK-INS
Congrats again to the thousands of parents, students and teachers across the country who participated in the May 4 walk-ins! More than 80 cities joined this nationwide action, making it a powerful and inspiring show of solidarity. You can check out some of the great pictures and news coverage from the event on our recap page.

DETROIT PUBLIC SCHOOLS FIGHTING BACK
The crisis in the Detroit Public Schools continues. On May 2 and 3, teachers staged a sick-out that closed nearly every DPS school after the district’s Emergency Manager announced that without additional state funding, district teachers would not be paid beyond June. On Thursday of the same week, in a fifteen hour marathon ending at 4:30 a.m., the Michigan House passed a package of legislation opposed by parents, teachers and community-based groups. The House legislation differed from passed Senate bills on issues of local control, charter accountability and the amount of funding. Meanwhile, students in the Detroit schools continue to suffer without adequate textbooks and in crumbling buildings. Read more here, here and here.

CHICAGO CHARTER SCHOOL EXPANSION IN THE NEWS
In Chicago, the School Board has granted a request by three charter networks to allow them to boost their enrollment by shifting building capacities between and among schools within their networks without applying for permission to expand. At the same time, members of Brighton-Park Neighborhood Council called on the Board to refuse to spend a recent $42 million grant from the federal Charter Schools Program on expanding the number of charters in the city. The federal expansion program is starting to draw fire from state legislators and local elected officials. Read more about it here.

CONSULTANTS PROPOSE CLOSING 30-50 SCHOOLS IN BOSTON
An audit commissioned by the Mayor’s office in Boston over a year ago was finally made public in early May, and it has sparked protests. The audit, conducted by the McKinsey Company, proposed that Boston Public Schools close 30-50 schools, cutting back on transportation for students, selling school facilities and reducing services to students with disabilities. Boston students are planning another round of walk-outs next week to protest ongoing budget cuts. See more about the McKinsey report here. 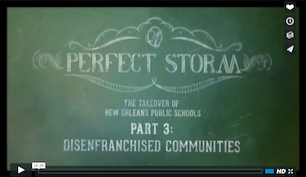 FILM SERIES SHOWS DISENFRANCHISEMENT OF NEW ORLEANS STUDENTS, FAMILIES
"A Perfect Storm" is an ongoing film series from the New Orleans Education Equity Roundtable chronicling the state's takeover of New Orleans public schools in the wake of Hurricane Katrina. The state handed control of the schools over to charter operators, making New Orleans the first all-charter district in the county, and, as the film series explores, this move had devastating consequences for students and their families. The newly released Part 3 of the film series shows how parents, students and community members have been disenfranchised and locked out of the decision-making process around their local schools. Watch here.

SAN DIEGO SLASHES NUMBER OF STANDARDIZED TESTS
The Superintendent of the San Diego Unified School District announced last week that the district would slash the number of mandated assessments in the schools by eliminating local standardized testing requirements and instead allowing individual schools to determine how and whether to assess students. State and federal assessments will still be required, but Superintendent Martin acknowledged that students need more time for learning and less time spent on tests.

CA STATE BOARD OF ED. REVISES ACCOUNTABILITY METRICS UNDER ESSA
Congress passed the Every Student Succeeds Act (ESSA) at the end of last year, allowing states to revise their accountability systems (which determines whether schools are classified as successful or “failing”) by adding additional indicators of success that go beyond test scores. California has become one of the first states to take advantage of the new law. Last week, the State Board of Education endorsed a half-dozen new metrics, including high school graduation rates and student suspension rates. It also directed staff to propose ways to measure school climate as a potential additional indicator. Californians for Justice has advocated for both student suspensions and school climate to be considered under the accountability framework. Read more about the changes and the role of Californians for Justice here.

CENTER FOR MEDIA AND DEMOCRACY FIGHTS FOR TRANSPARENCY
Over the past year, the Center for Media and Democracy has been going after the U.S. Department of Education, shining a light on the lack of transparency around federal funding for charter schools nationwide. Recently, CMD has been trying to force the Dept. of Education to release information on the hundreds of charter schools that received tax payer dollars but either closed soon afterwards or never even opened their doors. Read more here. 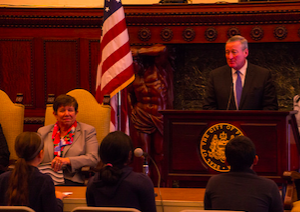 PHILLY STUDENTS SPEAK UP AT ROUNDTABLE WITH CITY COUNCIL
The Philadelphia City Council and the Mayor's Office of Education hosted a roundtable discussion last week specifically to hear from students in the city's public schools. Members of the Philadelphia Student Union and Youth United for Change as well as student representatives from across the district participated, many of them highlighting the impact of budget cuts on their educational experiences. Read more here and view more pictures here.

LOS ANGELES CHARTERS DRAINING MONEY FROM PUBLIC SCHOOLS
A new report commissioned by the United Teachers of Los Angeles shows that charter schools in Los Angeles are draining more than $500 million per year from the district's traditional public schools. The cost-out analysis provides a look at the fiscal impact of charters on the school district, including their administrative costs, audits and the increased burden of meeting students' special education needs in the district schools because charters under-enroll high-needs students. Read more here and download the report here.

NYC STUDENTS HIGHLIGHT POSITIVE IMPACT OF DISCIPLINE REFORM
A group of students with the Urban Youth Collaborative recently sat down with Chalkbeat to talk about how restorative justice practices are benefiting New York City students and fundamentally changing school discipline. The students speak from personal experience about how restorative practices improve school climate and create a more supportive environment that fosters strong relationships between students, teachers and other school personnel. Read the interview here.