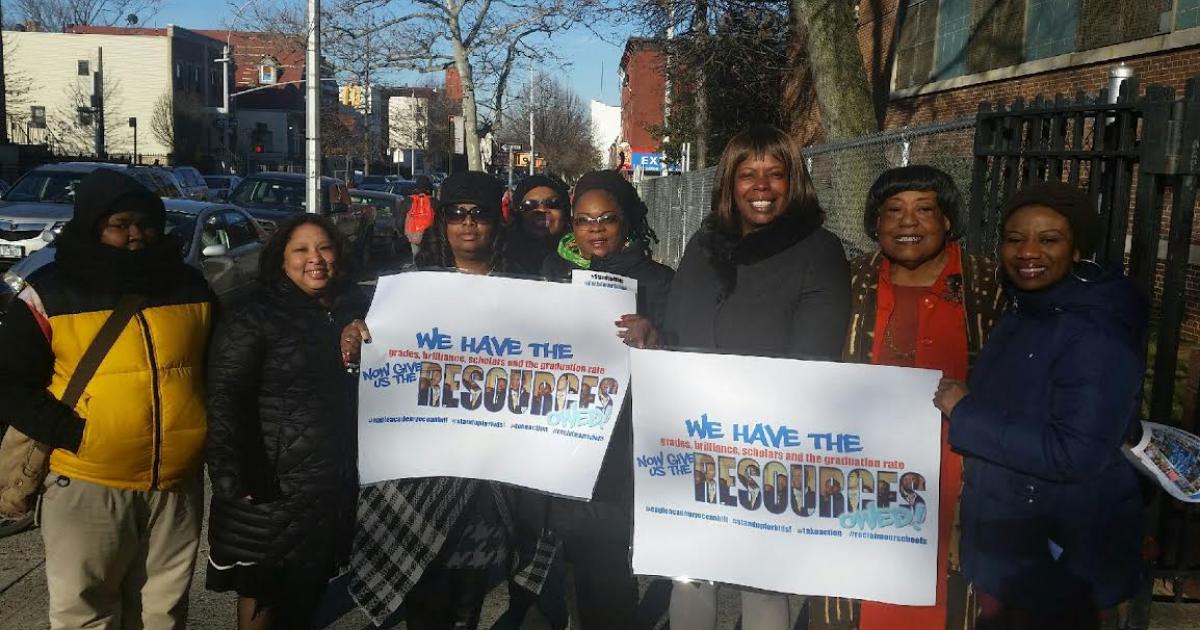 The Alliance to Reclaim Our Schools Newsletter
March 4, 2016

Special announcement this week: AROS is hiring! We're looking for a national campaigns coordinator, so check out the job posting for details and send resumes to AROS National Director Keron Blair (keron@reclaimourschools.org). 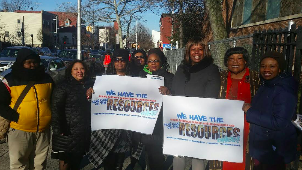 Participants at the Eagle Academy walk-in
in New York. Picture via Zakiyah Ansari.

A Day of Action Across New York
Students, parents, educators, legislators and education advocates held rallies at schools in more than 20 cities across New York on Thursday to draw attention to the enormous amount of funding owed to public schools.

The day of action focused on the need for fair and adequate funding for all schools through calling for a state aid increase of $2.9 billion. Organizers are also calling for struggling schools to become community schools rather than be put in receivership. Robert Jackson, the parent who started the Campaign for Fiscal Equity in 1993, was among those protesting for the long-standing need to fully fund New York public schools. Click here to read more about the day's events and click here for pictures from NYSUT.

Also in New York: The Alliance for Quality Education (AQE) is keeping the pressure on Governor Andrew Cuomo’s proposal to put $100 million into the creation of community schools in New York. AQE is demanding $250 million in investments, higher standards for the implementation of community school components, and a stronger role for parents and communities in the schools. Read more here.

A Step in the Right Direction for Chicago Schools
Illinois lawmakers took the first step towards returning control of Chicago's public schools to the local community. On Thursday the Illinois House of Representatives passed a bill that would replace the city's 7-member Board of Education, which is currently appointed by the mayor, with a 21-member elected board. The bill is now under consideration in the state senate, but it's a exciting first victory for the many organizers in Chicago who have been fighting to regain control of their schools. Read more here.

Also in Chicago: In a rare moment of solidarity, the Chicago Teachers Union and Chicago Public Schools have joined together to demand the shutdown of the Illinois State Charter Commission after the Commission overruled a CPS decision to close three Chicago charter schools for weak academic performance. The State Commission is empowered to overrule CPS on charter decisions. Read more from the Chicago Sun Times here. 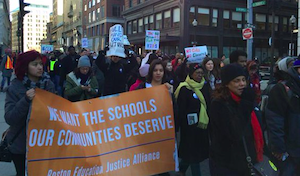 Participants at the Feb. 17 Boston event as
part of the national #ReclaimOurSchools
walk-ins. Picture via Bill Shiebler.

Storming in Boston! Support the Thunderclap
It’s time to throw down for public education in MA and across the country. The Massachusetts Education Justice Alliance (MEJA) and the Boston Education Justice Alliance (BEJA) are building a mass mobilization for Monday, March 7 to #keepthecap on charter schools and to demand full funding for all students in Massachusetts. Actions include turn-out and testimony at the State House on Monday morning, a student walk-out across all Boston Public Schools, and a protest against planned budget cuts at a School Committee budget hearing that evening. More details on the March 7 event here. You can help amplify the work of our partners at MEJA/BEJA by joining their Thunderclap social media action - sign up here today!

A National Call to Remove Police from Schools
After a video surfaced this week of a school police officer slapping and kicking a student in Baltimore, the Advancement Project, Alliance for Educational Justice and other groups released a joint statement calling on the U.S. Department of Education to take steps to remove police officers from school and call for restorative justice. This video is the latest to depict a school officer using violence against a student and stands as a testament to the need for positive discipline alternatives. Read the statement here.

New St. Paul Teachers’ Contract Includes School Discipline and Climate Supports
The St. Paul Federation of Teachers and St. Paul Public Schools have reached an agreement (still to be voted on by the membership) that includes a $4.5 million package of school discipline and school climate reforms, as well as funding for the addition of 30 full-time support staff for schools, including counselors, psychologists, ELL teachers and nurses. The inclusion of these resources in the contract agreement is a powerful example of how unions can use their collective bargaining power to fight for the supports their students need. Read a statement from the St. Paul Federation of Teachers here and read more from The Star Tribune here.

No on John King as U.S. Secretary of Education
A long list of individuals and organizations sent a letter to the U.S. Senate leadership urging them not to support the nomination of John King as Secretary of Education. King was education commissioner in New York State from 2011 to 2014, when he moved to D.C. to become an aide to former Education Secretary Arne Duncan. When Duncan resigned late last year, King stepped in as interim Secretary and was subsequently nominated by President Obama to succeed Duncan. The letter challenges King on his over-reliance on high stakes assessments and his oversight of the roll-out of the Common Core Standards.

April 1: Resistance is Rising in Chicago!
The Chicago Teachers Union is joining with other unions, students, parents, community organizations and others for a major action in Chicago with the April Fools-inspired theme, "We’re Not Fools, Fund Our Schools!" The actions will target developer tax rip-offs like TIFs, billionaires who want to privatize education while defunding public schools, and banks that are gouging the school districts with high fees and predatory loans.

AROS is supporting the Chicago action and we encourage all AROS partners to hold solidarity actions in their own cities, including actions for school funding and wearing red on April 1. Let us know at info@reclaimourschools.org if you will be joining in on April 1 and what you're planning.