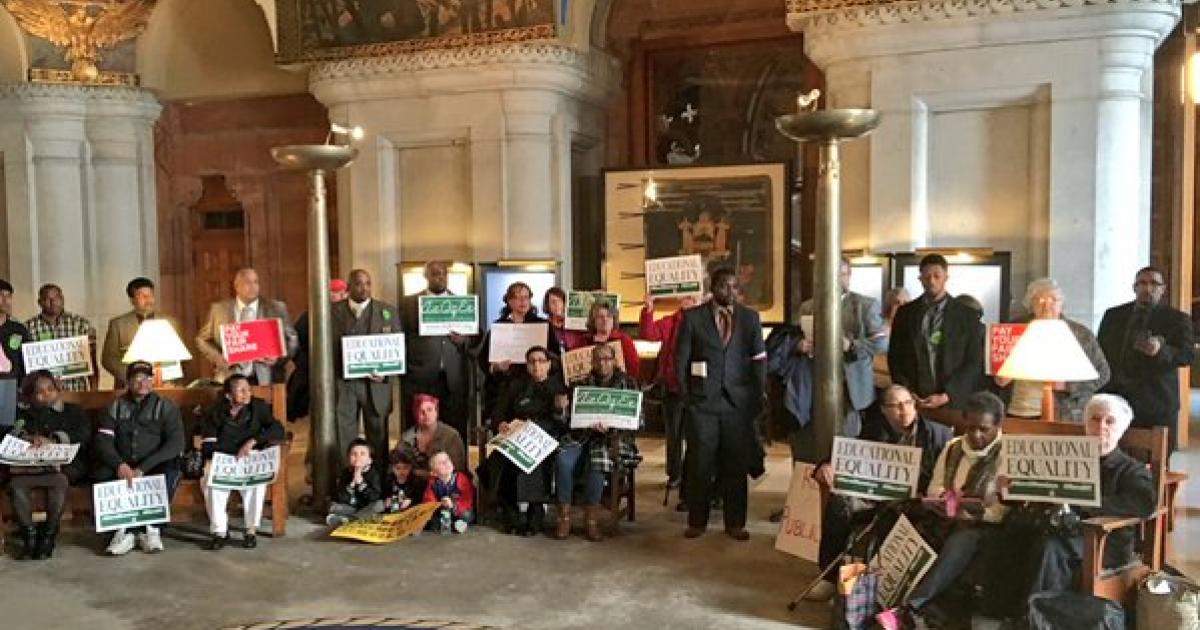 The Alliance to Reclaim Our Schools Newsletter
March 18, 2016

Welcome to our March 18 newsletter! As always, share the latest stories from your city or state with us on Twitter and Facebook. Don't forget to tell your friends and colleagues to sign up for our newsletter here.

AROS is hiring! We're looking for a national campaigns coordinator, so check out the job posting for details and send resumes to AROS National Director Keron Blair (keron@reclaimourschools.org). 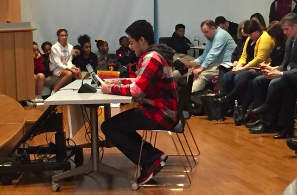 A Boston student testifies at the Wednesday
budget hearing. Picture via Jessica Tang.

FIGHTING BUDGET CUTS IN BOSTON SCHOOLS
It was standing room only at a School Committee budget hearing in Boston on Wednesday night. Nearly 100 people, many of them students, testified about the impact of proposed budget cuts in the district. Last week, thousands of Boston students staged a walk-out, and Boston Mayor Marty Walsh quickly agreed to reprioritize the district budget to spare high schools from the worst cuts. But the district still faces a $32 million shortfall, and parents, students and teachers are determined not to see their schools bear the brunt of that shortfall. Read more about the Wednesday hearing here.

DAVID HORNBECK ON COMMUNITY SCHOOLS
For former Philadelphia superintendent David Hornbeck, the community schools model is a way of thinking about schools, students, families and the wider community in a way that makes "the whole greater than the sum of the parts." In a column for The Notebook, Hornbeck highlights a school-level initiative in Baltimore and a state-wide program in Kentucky to show the power of harnessing community resources in support of schools, students and their families. Read his column here. 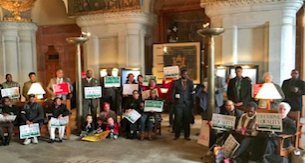 On March 7, dozens of Schenectady clergy joined
the statewide fight for more school funding
at the NY capitol. Picture via Chad Radock.

SIGN THE NEW YORK PETITION TO #STANDUP4KIDS
The Alliance for Quality Education launched a petition to New York Governor Andrew Cuomo and state legislators urging them to #StandUp4Kids and provide the funding public schools need to give every student a high quality education. AQE is calling for a 1 percent increase in taxes on the top 1 percent of earners in the state, which would raise more than $2 billion in funding for schools. With 50 percent of New York children living in poverty, the added funding would go a long way towards ensuring all kids get the resources they need to succeed in school. Sign the petition here!

SUBTLE BUT POWERFUL CHANGES IN ESSA
In a column for The Washington Post, Martin Blank, president of the Institute for Educational Leadership and director of the Coalition for Community Schools, teases out the subtle differences in tone and language between the new federal Every Student Succeeds Act and its predecessor, No Child Left Behind. Read his op-ed here.

April 1: Chicago Solidarity
Chicago organizers have big plans for April 1, and they’re asking all of the Alliance to Reclaim Our Schools network to support them. The Chicago action will focus on the city and state's refusal to fully fund Chicago Public Schools and the role of the billionaires and Wall Street interests in systematically stripping money away from schools. The Chicago Teachers Union and its allies are calling for progressive taxation to support schools and universities and to restore critical services. Please organize your organization's members to wear red on April 1 to show your solidarity for Chicago. And don't forget to post some pictures to Twitter and Facebook using #ReclaimOurSchools and #brokeonpurpose. Read more about why CTU is hosting this action action here and sign the RSVP to show your support.

May 4: More National Walk-Ins on the Horizon!
Mark your calendars: After the success of the February 17 walk-ins, the Alliance to Reclaim Our Schools will be organizing a second national walk-in event on May 4. We'll have more details soon, so stay tuned! We've also updated our walk-in toolkit from February with new materials for the May event.