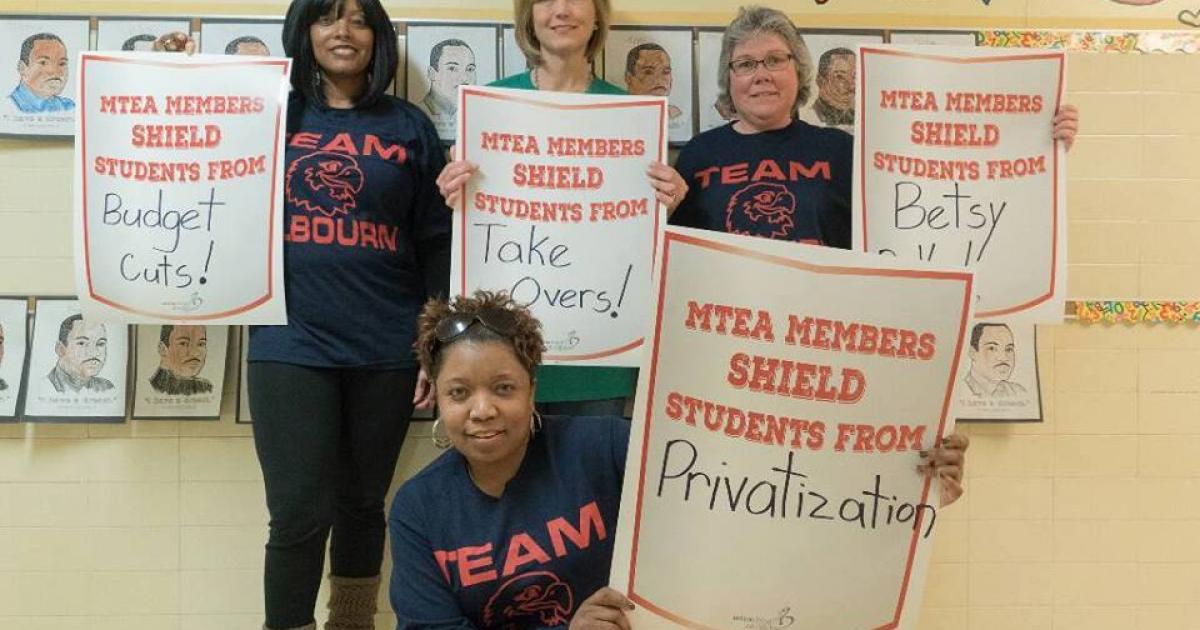 On Thursday, the President released a “skinny” outline of his federal budget priorities for 2018, confirming the intentions of the Trump/DeVos administration to fundamentally dismantle public education in favor of a privatized market place of “schools of choice.” The impact of this budget cut will fall most heavily on the shoulders of black and brown students and their community schools.

Here are a few things that are included in Trump’s priorities:

There is a long process ahead for these proposals. The final decision on the president’s proposals rests with Congress.  We expect more details about these new programs in late April or in May.  The full budget then goes to the appropriate committees in Congress, which will decide how much of it to accept, what to reject, and what the final funding levels will be. Much more to come.  It’s going to be a fight.  AROS released a statement on the President’s budget proposal yesterday. Read it here.

Students, parents, teachers and community members are calling on the Boston School Committee to once again reject the Mayor’s proposed school budget which would result in drastic cuts to some of the city’s most vulnerable schools and students. “Now, more than ever,” says the Boston Education Justice Alliance, “our mayor and our city need to make a commitment to fighting for and raising more revenue for our schools. We stand ready to help in that endeavor.”

Last year, thousands of high school students walked out in protest of the Mayor’s budget cuts.  We’ll see what this spring brings.

With temperatures forecast to be in the 70s, the superintendent of the Albuquerque, New Mexico public schools shut down the district schools for half a day on Thursday, declaring it a “snow day” and encouraging parents, educators and students to rally at the state house in support of education funding.  The state legislature is nearing the end of its session, and is debating a budget that attempts to stave off further cuts to public education through a number of proposed tax increases.

“My hope is that in setting up our day of action that people take this seriously as a day of action, a day to call out to their governor to please compromise and do the right thing on behalf of kids and public schools,” said school board member Steven Carrillo, who first proposed the idea of using a “snow day” for activism during a Monday school board meeting. Students were released between noon and 1:00 on Thursday.  The legislature wraps up its work on Saturday. Read more here.

Kentucky became the 44th U.S. state to allow charter schools when the state legislature passed a new charter school law this week.  Former Philadelphia schools superintendent David Hornbeck wrote a powerful opinion piece for the Lexington Herald-Leader, describing why he now believes that charter schools are the wrong way to go. It’s a great commentary to hang on to for general messaging.

The Annenberg Institute for School Reform released a strong statement this week, denouncing the Trump assault on schools, communities of color, immigrants, Muslims, LGBTQ communities and others.  “The increases in racist, xenophobic, homophobic, anti-Semitic, and Islamophobic bullying and hate speech – which are a direct result of this administration’s rhetoric and policies – poison school cultures and threaten many students beyond those directly impacted by the orders,” notes the statement.

Save the Date: On May 1st, AROS and its partners around the country will join immigration marches and rallies planned for that day. We cannot have a fair and effective education system if students and their families are not safe and valued, and we will protect our friends, classmates, students, families and communities from President Trump’s aggressive assault on immigrant students and families. Look for more details soon.

Tags:
newsletter
Get the latest: