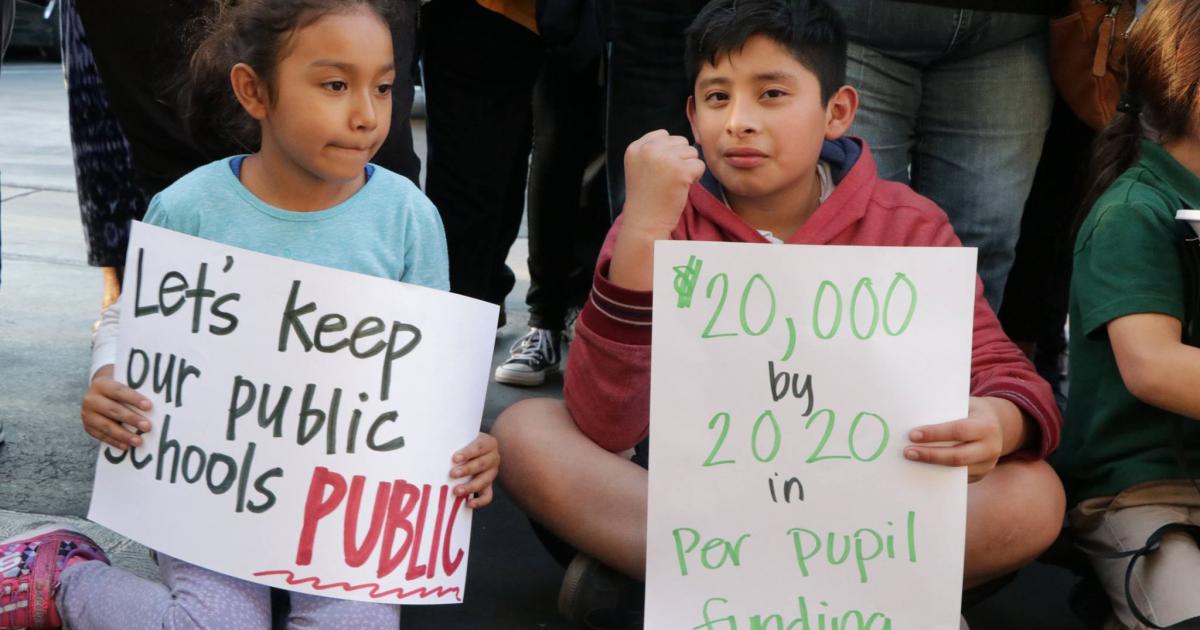 A People’s Vision for Newark

PULSE in Newark is participating in an education visioning project tomorrow – June 9th. Called “Newark Communities Envision Education,” the event is designed to allow Newark residents to put together and put forward a set of recommendations for their schools (which are returning to local control after over a decade of state control). Participants will be asked, for example, “what does deeper learning in your child’s school look like to you?” and “what do you want your child to learn, know and do, by the time they graduate from high school?”

The event is from 12:30—2:30pm, at the HELPUSA Community Room, 634 Clinton Avenue, Newark. For more information, contact Johnnie Lattner, with PULSENJ at jlattner07@gmail.com

The U.S. Supreme Court is expected to issue its decision in the case of Janus v. AFSCME in the next 3 weeks. Rulings are typically announced on Mondays, and the Court’s final day for the current session is June 25th.

Janus is the latest in a long line of attacks from the corporate elite aimed at destroying unions and collective bargaining, not to mention the progressive political power of organized labor. Mark Janus, the plaintiff in the case, is a public employee, and not a member of the union in his workplace. But the union is required by law to represent and negotiate on behalf of all workers, whether they have joined the union or not. All employees receive the wage increases, benefits and workplace rights that are negotiated by the union. Mark Janus is arguing that the state law requiring him to pay “agency fees” to the union violate his First Amendment rights, because he disagrees with the union’s political views. He is asking the Court to eliminate agency fees—a move that will significantly impact unions by effectively making membership completely voluntary in the 22 states that have agency fee laws.

The outcome of the Janus case has broad implications for low-income and working families; as the loss of public sector unions could ultimately lead to lower wages, poor working conditions, and a lower quality of service provided to the most vulnerable communities.

AROS is standing with the teachers, and public-sector workers everywhere. Please take a moment to read our fact sheet about the case, and a commentary from AROS co-directors Keron Blair and Jay Travis.

New Article Outlines the History and Challenges of Privatization

Joanne Barkan has written a new piece on the history and problems with privatization. It’s definitely worth a read. The article runs through the origins of the idea of market-based reform in education and tracks its development as a political movement in the United States. It looks at how the language of “choice” has been developed as a subterfuge to talk about privatization. It reviews the research on charter school and voucher performance, and fraud, waste and abuse within the movement. Barkan ends with a call to action: “Time is short for rescuing and improving public education. Destroying it will not require privatizing the entire system or anything near that. We are watching death by a thousand cuts.” Give it a read.

Several AROS tables are planning for a day of action scheduled on Monday, June 11, in partnership with the Poor People’s Campaign, which will highlight the intersection of attacks on public schools, teachers, the right to organize at work and the need for affordable housing. Activities will be held across the country in state capitals.

The Poor People’s Campaign is a call to action on a range of issues affecting communities of color and low-income people. The Campaign began on May 14th and continues through June 22nd. Each week is highlighting a different set of issues, and includes actions at state capitols across the country. Many actions involve civil disobedience. You can find actions near you by going to this link on the Campaign website.

Fresh off her gaff last week before a House subcommittee, where Education Secretary Betsy DeVos suggested that individual schools should decide whether to report undocumented children to ICE (they can’t – it’s unconstitutional), the Secretary headed up to Capitol Hill this week to embarrass herself again before Congress.

This time, she told a Senate subcommittee that the school safety commission that she heads will not address the issue of guns. Say what? The Commission was established by President Trump in the wake of the shooting at Marjorie Stoneman Douglas High School in Parkland, Florida. Its charge is to consider ways to improve school safety. DeVos apparently is taking the effort in a different direction—providing cover for what many expect will be her decision to rescind guidance and regulations on discrimination in school discipline, put out by the Obama Administration. DeVos has said that she was considering rescinding the guidance, which is designed to help school districts avoid the discriminatory use of discipline policies. The DeVos Commission has been controversial since the get-go:  DeVos appointed only three members to the Commission, all current cabinet secretaries. None are experts on education (certainly not DeVos), or safety, or mental health. None are parents, students or providers. Initial meetings were held behind closed doors, and only after an uproar about that, were a couple of invitation-only events scheduled. [And we just had to include the picture above, from the Department's website, of one of the Commission's meetings with the "public."  It looked all white to us.  What do you think??]  One of those events was held this week. But DeVos herself – the chair of the Commission – was not in attendance. After this week’s gaff on Capitol Hill, she headed to Switzerland.

According to the Department of Education, the commission will hold three additional listening sessions in other regions of the country. No dates or locations were announced. But the Department did unveil a commission website, and promises that scheduled hearings will be announced on it.