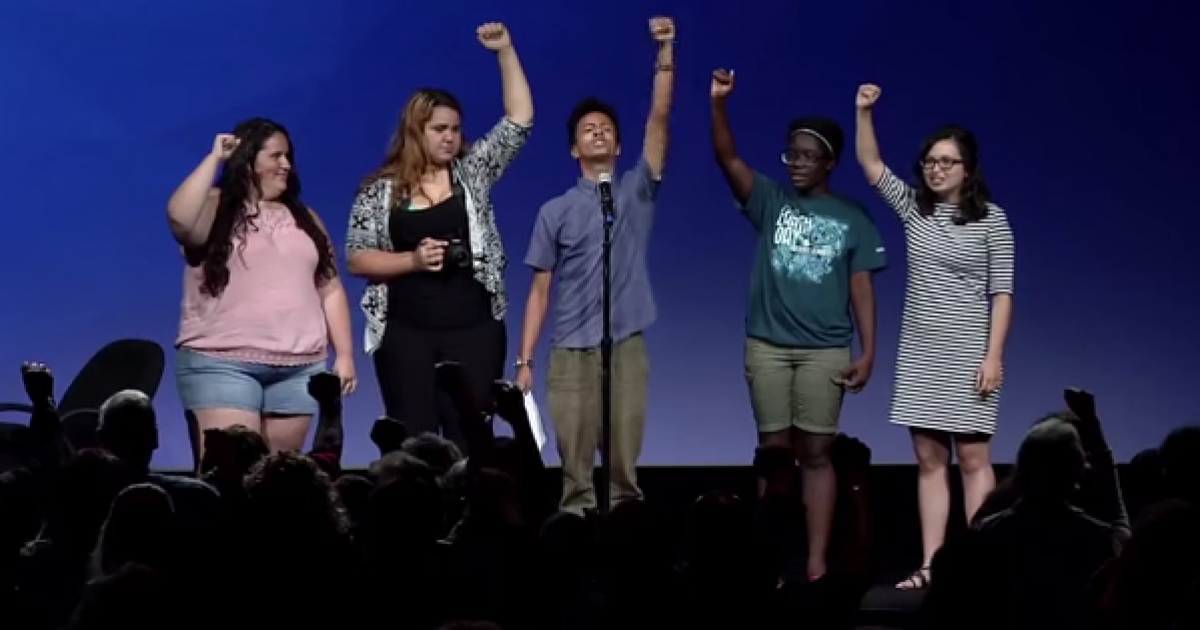 The Alliance to Reclaim Our Schools Newsletter
July 17, 2015

Welcome to our July 17 newsletter! Share the latest from your city or state with us on Twitter and Facebook. Don't forget to tell your friends and colleagues to sign up for our newsletter here. 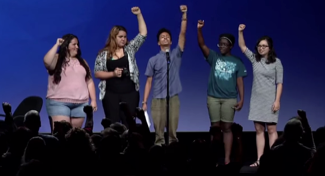 Members of the Newark Student Union
lead the audience at Teach 15 in a chant.
Picture via AFT.

ESEA
Defying all expectations, federal lawmakers are actually moving forward with a rewrite of the Elementary and Secondary Education Act. Both the Senate and the House passed versions of the bill this week, which now head to conference committee. We'll be out early next week with our thoughts on the two bills, so stay tuned. In the meantime, Rev. William Barber, leader of the North Carolina Moral Monday protests, wrote a powerful op-ed in The Hill this week, in which he lays out exactly what's at stake in the national debate over how to improve our nation's schools and ensure equal opportunity for all students. Read the op-ed here. And click here to read a piece from Vox about the growing divide between civil rights organizations over the use of high-stakes testing. The article also highlights a recent open letter to Congressional leaders from AROS partner Journey for Justice.

NEWARK:
The Newark Student Union got a major shout out this week with a chance to address participants at the American Federation of Teachers' Teach 15 conference (pictured above). These students are an endless source of inspiration for their community and advocates across the country. They've been leaders in the fight to stop the privatization of public schools and helped to force the resignation of state-appointed Superintendent Cami Anderson. The fight to regain local control of the city's schools is far from over, but one thing is clear: the NSU students will be on the front lines of that fight! Watch their Teach 15 speech here, then go follow them on Twitter and like them on Facebook. 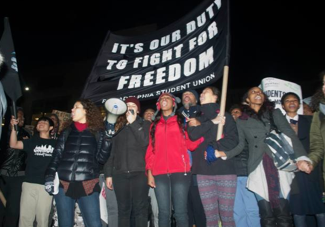 PHILADELPHIA:
Speaking of student organizers, the Philadelphia Student Union needs your help! PSU has launched an Indiegogo campaign to raise funds for a new office and organizing space. They were evicted from their old offices in April so that the landlord could remake their building into a restaurant and apartments. These young people have done tremendous organizing work throughout the years, leading student walkouts, rallies and protests to fight for the resources their schools need and that all students deserve. Read a short feature on the fundraising campaign from The Notebook here. Then click here to donate. (Even a couple of dollars will help!)

Also in Philadelphia: The Media Mobilizing Project has launched a collection of videos and testimonials from the city's parents, students and teachers to show the impact of school budget cuts and efforts to privatize Philadelphia's education system. Check out PublicSchoolVoices.com to see the videos, pictures and interviews.

ST. LOUIS
One more piece of great news from the student organizing world: Students 4 Change recently held a meeting with St. Louis and Normandy school district superintendents to demand changes to school discipline policies to limit the use of out-of-school suspensions and end the school-to-prison pipeline. The superintendents agreed to the students' demands to develop a list of alternatives to suspensions, create a student handbook with clear guidelines for behavior and consequences, monitor the district's progress in reducing suspensions, and create a parent newsletter detailing the harmful impact of suspensions. Read more here. 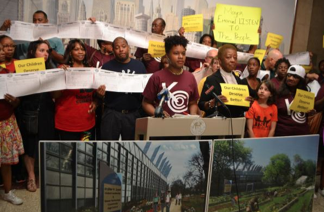 CHICAGO
When it comes to harmful and destabilizing mass school closures, Chicago takes the prize: several years ago, district officials shuttered nearly 50 struggling public schools in predominantly low-income communities of color. Organizers are still fighting to save one school in particular, Dyett High School, and groups like the Kenwood Oakland Community Organization have worked with the local community to develop an alternative vision to transform Dyett into a full-service community school. Organizers held a protest this week at City Hall to keep Dyett open, which you can read more about here. You can also read more about how Dyett embodies the fight to protect public schools across the city here.

NEW YORK
When your governor attends a $5,000-per-plate fundraiser in the Hamptons, hosted by one of the hedge-fund managers who plays an outsized role in setting the governor's policy agenda, what's an organizer to do? Crash the party, of course! This past week, a group of New York organizers, aptly named the Hedge Clippers, took their protest to Governor Cuomo's event, calling on him to listen to the voices of the state's parents, students and teachers rather than his financial backers. Read more about the protest here, and check out some great pictures here.

July 27: The Schott Foundation's Opportunity to Learn Campaign will be hosting the first installment of their Grassroots Education Series with a webinar for organizers on branding, communications and social media with Race Forward: The Center for Racial Justice Innovation. Click here for details.