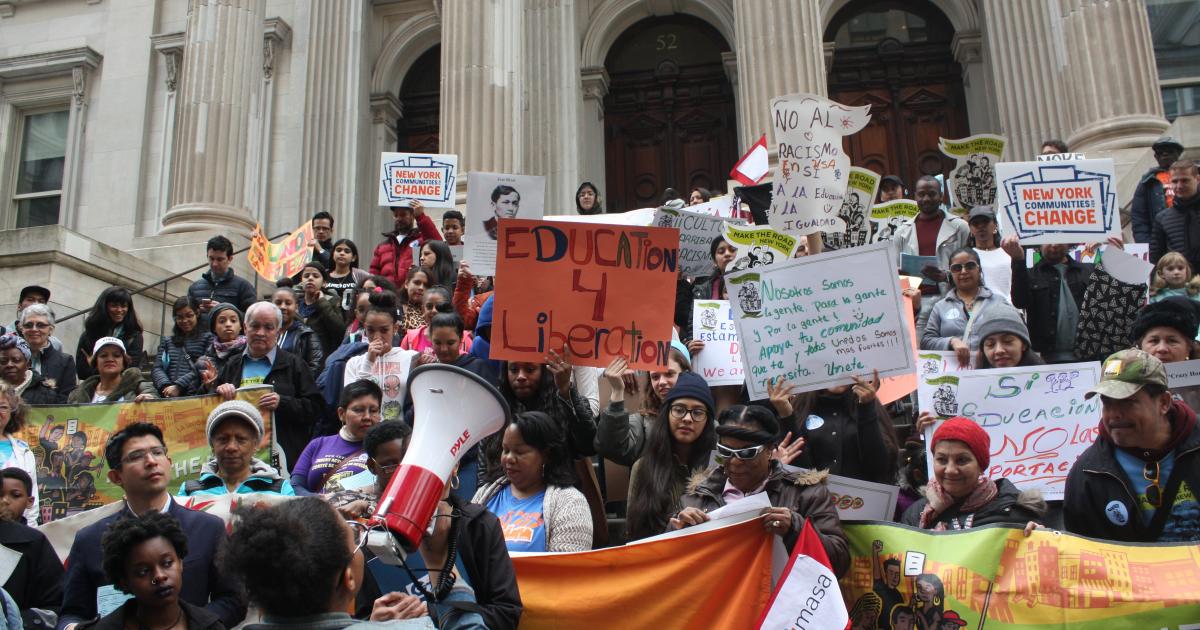 Welcome to the Fight-Back!

In this week’s Welcome to the Fight-Back dispatch, we focus on activities planned next week in Denver, where the annual conference of the American Legislative Exchange Council (ALEC) is taking place.  ALEC, of course, is the right-wing policy shop that cranks out model legislation on a wide range of issues, and encourages conservative legislators to introduce and co-sponsor it.  This year, education is one of their key issues—in fact Education Secretary Betsy DeVos is their keynote speaker.

As part of their education agenda, ALEC is promoting federally funded “education savings accounts”—a form of vouchers—and encouraging state legislatures to pass a model resolution (created by ALEC) calling on Congress to create such a “neo-voucher” program at the federal level. Currently five states (AZ, FL, MS, NV, TN), allow public funds—state dollars in the amount of existing per pupil expenditures for a student—to be deposited into a savings account designated for a specific child.  The family must apply those funds towards private or religious school tuition or other education expenses.

Activists in Denver are expected to stage protests against ALEC, and specifically against Betsy DeVos’s appearance at the ALEC convention next week.

Sixty-four Democrats in Congress sent a letter to Education Secretary Betsy DeVos last week, expressing concern over the Trump/DeVos administration’s enforcement of civil rights laws at the Education Department. The lawmakers said that proposed budget and staffing cuts at the Office for Civil Rights and the repeal of guidance regarding transgender students "signals, at best, a troubling hands off approach to protecting the civil rights of students across the country and, at worse, a complete undermining of the equal protections guaranteed by the Fourteenth Amendment of the United States Constitution." The letter was led by Sen. Cory Booker (D-NJ) and others, and signed by members of the Congressional Black Caucus, the Congressional Hispanic Caucus, and the Congressional Asian Pacific American Caucus.  Read the full letter here.

A group called Save Our Schools is fighting new legislation in Arizona that would dramatically expand the state’s voucher program.  Save Our Schools is collecting signatures to refer the law to voters as a ballot referendum in November 2018.  The group is arguing that the voucher program strips public funds away from school districts, and that the vouchers will benefit only more moderate income families.  Save Our Schools announced that they are on track to collect the necessary signatures by the August 8th deadline for stopping the new law from going in to effect.

Nashville School Board Member Writes about the Charter Industry

Amy Frogge, a member of the Metro Nashville School Board, wrote a powerful post about Nashville’s experience with charter schools and their backers.  The piece is well-worth reading.  In it, Frogge writes about the toxic political debate over charters and the way that the charter industry has doggedly pursued its agenda despite evidence that charters divert funds from public schools, invite fraud, waste and abuse, fail to improve student outcomes. Frogge believes that the tide has turned in Nashville, that the industry is losing ground and many players are leaving for greener pastures. But other cities and states now need to be on the lookout for these shysters, she notes.

Restorative Justice (RJ) is a philosophy that emphasizes repairing the harm caused by conflict and wrongdoing. It provides an opportunity for everyone impacted by an incident to come together in a safe space to address their feelings and needs, and reach a resolution that repairs the harm and restores relationships. RJ is more than just an approach to discipline; it's a way of changing the culture in a school. Join the #WECHOOSE Campaign webinar to learn more about restorative justice, the philosophy behind it, and best practices for implementation. Click here to register.

The Urban Youth Collaborative (UYC) is looking for a dynamic organizer to join our team as the Coalition Coordinator. For 13 years, UYC has brought together young people from youth-led organizations across New York City to build campaigns designed to transform our public schools and struggle for racial, gender, economic, and LGBTQ justice, and keep young people at the forefront of movements for human rights. UYC has accomplished tremendous victories over the years including, saving Student MetroCards, passing the Student Safety Act, winning Student Success Centers, and securing over $5 million for Restorative Justice in public schools.  Find out more about this job opportunity here.

July 18th:  #WECHOOSE webinar on the philosophy behind, and track record of restorative justice in transforming school culture.  Click here to register.

July 19th:  Activists in Denver take on Betsy DeVos during her speech to the ALEC Convention.  Join the protest by using the hashtags #reclaimourschools, #dumpDeVos and#ALECinDenver.