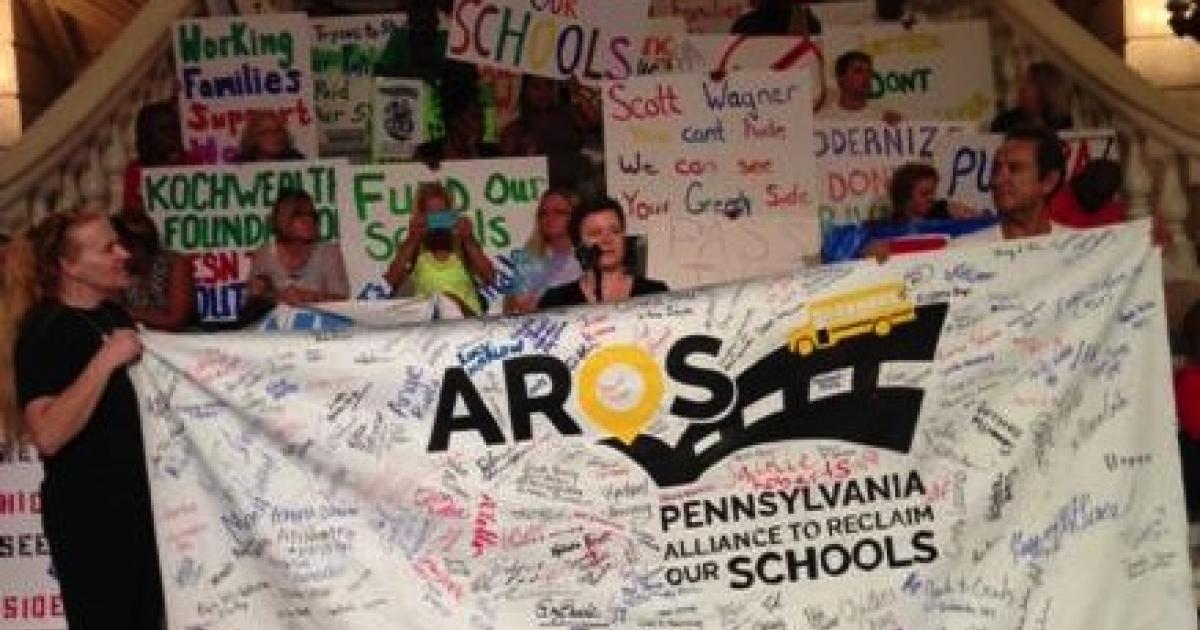 The Alliance to Reclaim Our Schools Newsletter
July 10, 2015

Welcome to our July 10 newsletter! Share the latest from your city or state with us on Twitter and Facebook. And don't forget to tell your friends and colleagues to sign up for our newsletter here. 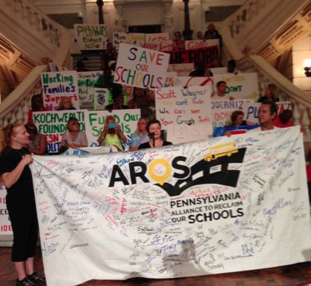 Members of PA AROS wrapped up their
bus tour with a rally at the state capitol.
Picture via @PA_AROS.

PENNSYLVANIA
The Pennsylvania Alliance to Reclaim Our Schools wrapped up a statewide bus tour at the end of June, after a successful few weeks on the road to raise support for a full, fair funding system for the state's schools. The issue of school funding has become a key sticking point in the ongoing budget battle, and Gov. Wolf (who was elected with the backing of a strong education-focused coalition) has already vetoed one budget bill for failing to provide adequate support for schools. Check out pictures from the PA AROS bus tour and their culminating rally in Harrisburg here.

ESEA DEBATE:
Bills to reauthorize the federal Elementary and Secondary Education Act were on the move this week in both the U.S. House and Senate. In a strong show of community voice, 175 parent, student and teacher groups from across the country signed on to a letter penned by the Journey for Justice Alliance urging lawmakers to end the use of high-stakes testing and instead support well-funded, full-service community schools. Read the letter here and check out news coverage of the letter here and here.

Also in ESEA news: An amendment to the Senate version of the bill passed this week and will allow community schools to use Title IV funding to hire resource coordinators to ensure schools have a point person for arranging wraparound services for students and their families. The amendment, which was introduced by Sen. Sherrod Brown of Ohio and Sens. Joe Manchin and Shelley Moore Capito of West Virginia, passed unanimously. Read more here.

NEWARK
After successfully pushing for the resignation of state-appointed Newark Superintendent Cami Anderson, Newark's parents, students, teachers and community members will now play a prominent role in helping to transition the district back to local control. Gov. Chris Christie and Newark Mayor Ras Baraka have each named members to a panel to guide the transition. While the Governor's appointees are mostly state education officials or business people, the Mayor tapped a former principal, a reverend, a parent activist and the president of the Newark Student Union. Read more here.

NATIONAL
The Schott Foundation's Opportunity to Learn Campaign released a second batch of fact sheets for their "Investing in the Future" report, which outlines key state-level strategies for raising new funds to invest in education and other public programs. This batch focuses on reforms to things like capital gains taxes and business tax breaks in order to make sure everyone is paying their fair share to support our nation's schools. Check out all the fact sheets here.