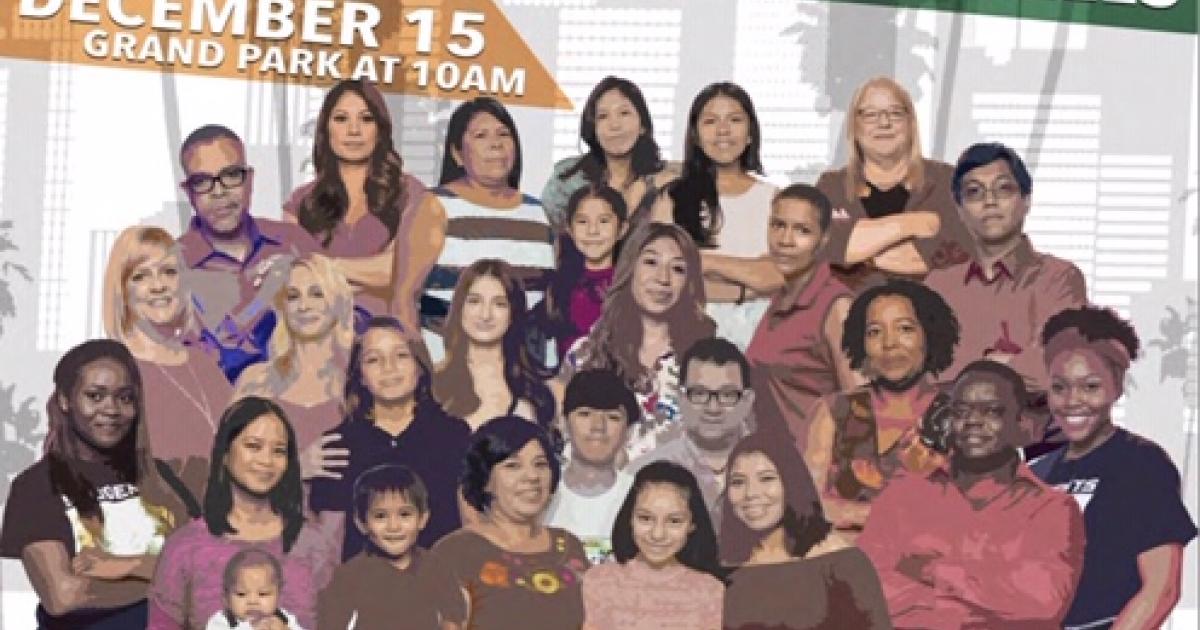 We Are All LA

The eyes of the nation are turning towards Los Angeles, where a teachers strike is looming as educators call for greater investment in their schools and students, smaller class sizes, an end to random student searches and more. "Los Angeles is in the spotlight right now,” said AROS co-director Jay Travis, “but the same fight is happening in cities across the country. Public education is being sabotaged and dismantled by big business. It’s happening everywhere. That’s why AROS and other organizations are jumping in to support the teachers, parents and students of Los Angeles. We are all LA.”

A series of actions and demonstrations of support are taking place. Here’s a round-up:

Over 380 organizations around the country endorsed and signed on to an open letter that was printed in the Los Angeles Times on Monday of this week. The ad acknowledges UTLA’s demands for smaller class sizes, charter school accountability, higher teacher salaries and an end to random searches of students inside schools, and links the issues raised by the union to those being faced by districts across the country.

At least 50 protesters from Reclaim Our Schools LA (ROSLA) shut down a meeting of the Los Angeles School Board on Tuesday. The protest prevented the Superintendent from publicly introducing his plan to break up Los Angeles Unified School District (LAUSD) into 32 separate “networks,” a move many see as the beginning of so-called “portfolio” reform in Los Angeles. Portfolio districts are the invention of promoters of privatization and are based on a Wall Street model, where systems of local schools (both public and charter) are viewed as similar to a stock portfolio. Performance is ranked and rated, and “under-performing” schools can be closed or converted to private management. Under most portfolio strategies, school closings increase, new charters are expanded, district central offices are dramatically downsized. In other cities under portfolio reforms (New Orleans, Indianapolis and other districts), the break-up of a centralized district has increased disparities in resources among schools, led to greater segregation and disproportional distribution of students with special needs.

Photo of protest at the LAUSD School Board meeting by Howard Blume, Los Angeles Times

Tomorrow:  The March for Public Education

Thousands of parents, students, teachers and school support staff are expected to march side-by-side in downtown Los Angeles on Saturday, December 15th in a March for Public Education, to demand that Los Angeles Unified School District stop starving schools and invest in students and educators.

The march will send a signal to LAUSD Superintendent Austin Beutner, that United Teachers Los Angeles has the support of parents and students should the teachers union call a strike after the first of the year.

Beutner, a former investment banker, refuses to use the district’s record-breaking reserve for student needs or to address the $600 million drained from neighborhood public schools by the corporate charter industry. Instead of reinvesting in schools, Beutner is attempting to dismantle them, charges Reclaim Our Schools LA.

“Austin Beutner refuses to use the district’s historic level of financial reserves for our students, who overwhelmingly are students of color from low-income families,” UTLA President Alex Caputo-Pearl says. “More than 80% of LAUSD schools do not have a full-time nurse, class sizes are among the largest in the state, and counselor caseloads are crushingly high. There is no far-off ‘rainy day’ for the district to save for—the rainy day is now, and our kids deserve the investment.”

Saturday’s march will begin at Grand Park, in front of City Hall, and end at the Broad Museum—highlighting the destructive role billionaires like Eli Broad play in draining neighborhood schools of money by funding the corporate charter industry and privatization efforts like the portfolio model.

ROSLA and UTLA are calling on supporters of public education across the country to join them on Saturday by lifting up their messages on social media.

The Alliance to Reclaim Our Schools (AROS) and the Journey for Justice Alliance (J4J) are helping to organize a social media campaign. Social media instructions are included HERE. Please activate your networks and help amplify the march.

The debate over how to make schools safer is getting more heated as we wait for the release of the final report of the School Safety Commission—the study commission created by President Trump after the shooting at Marjory Stoneman Douglas High School in Parkland, Florida last February. The Commission was chaired by Education Secretary Betsy DeVos.

No one expects the Commission’s report to call for greater student voice, more gun control, restorative practices or a slow-down in the growing school security industry (now an over $2 billion market). Indeed, DeVos asserted early on that the Commission would not address gun control. Many expect that she will use the Commission as cover to rescind guidance developed during the Obama Administration to aid schools in avoiding racial discrimination in their discipline practices. The Commission may also recommend states allow teachers to carry guns on school grounds.

The Commission report is expected to be released any day now. In the meantime, policymakers and youth leaders are addressing the issue:

Republicans on Capitol Hill Call for Increased Funding for SROs

On Capitol Hill, Republican lawmakers have introduced legislation calling for an additional $75 million for the Department of Justice’s Community Orienting Policing Services (COPS) program, which funds the nation’s School Resource Officers. Michigan Representative Paul Mitchell (who is also the chair of the Congressional caucus on school choice) introduced the School Resource Officer Act, which would boost funding for the program from its current $225 million to $300 million.

Meanwhile, the call for #PoliceFreeSchools is growing. On December 5th, students and supporters marched in Washington, DC to call for cops out of schools.

Organizing for police-free schools is taking off after the September release of We Came to Learn: a Call for Action for Police Free Schools, by the Advancement Project and the Alliance for Educational Justice. Also amplifying the demand is the release of the #YouthDemand video and petition targeting the Commission, by the Center for Popular Democracy.

Students across the country are standing up to demand school safety that doesn’t further criminalize Black and Brown communities and instead centers students' opportunities to learn and the freedom to thrive.  Their demands include divestment from school policing and funding for more guidance counselors, mental health supports, restorative justice, and higher pay for their teachers, among other things.

See a video compilation of last week’s march and rally for #PoliceFreeSchools HERE.

Also joining the fight are Democratic attorneys general from around the country, the Congressional Black Caucus and other Democratic members of Congress, who issued a statement this week asking Education Secretary Betsy DeVos not to rescind the Obama-era school discipline guidance.

President Trump asked the Commission to address whether the guidance ‘contributes’ to school violence, making school leaders reluctant to call the police on potentially “dangerous” students. Many of the right-wing education reform organizations have been calling on DeVos to rescind the guidance for months.

Activists also fear that the Commission could call for arming teachers in schools, a move that most in the education establishment consider ludicrous at best, and terrifying at worse.

Tags:
We are all LA
ROSLA
#PoliceFreeSchools
DeVos
UTLA
Get the latest: