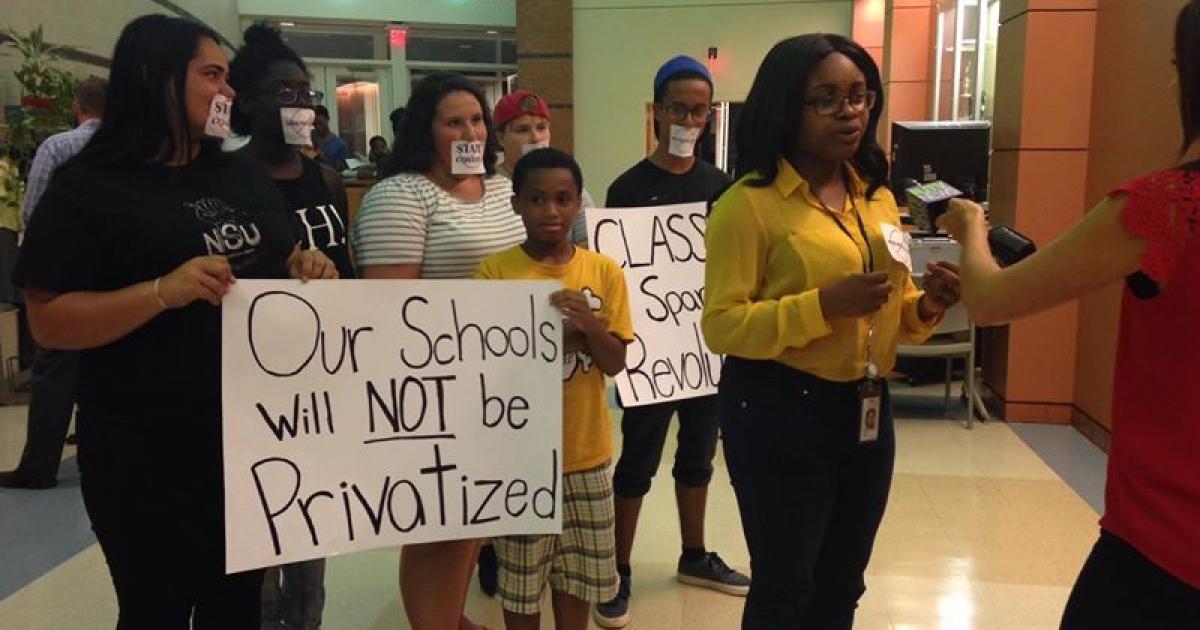 The Alliance to Reclaim Our Schools Newsletter
August 28, 2015

Welcome to our August 28 newsletter! Share the latest from your city or state with us on Twitter and Facebook. Don't forget to tell your friends and colleagues to sign up for our newsletter here. 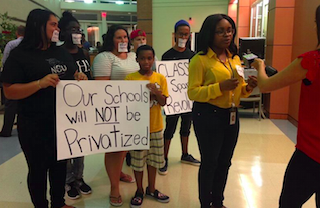 NATIONAL REPORT RELEASED
The Alliance to Reclaim Our Schools released a new report this week called "Out of Control: The Systemic Disenfranchisement of African American and Latino Communities Through School Takeovers." The report raises concerns that state takeovers of schools and districts are enabling the privatization of our nation's education system by removing local institutions from the  control of elected school boards and instead turning them over to outside charter school operators despite strong local opposition. More concerning, these takeovers are happening almost exclusively in African American and Latino communities. Read the report here. Read below for news from several cities that were featured in the report and held local release events.

LOCAL RELEASE EVENTS:
Newark: Members of the Newark Student Union and NJ Communities United attended the city's school board meeting on Tuesday to greet the new, governor-appointed Superintendent, Chris Cerf, and distribute copies of the new AROS report. The organizers have long been fighting for the state to return control of Newark's public schools to the local community. View more pictures from the event here. 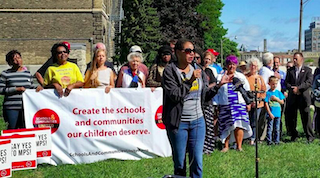 Little Rock: Local advocates held a press conference in Little Rock on Thursday to draw attention to the state takeover of the city's public schools and the dissolution of a locally elected school board that had pledged to bring increased resources to the city's schools and students. Read more about the event here and view pictures here.

Cincinnati: Members of the Cincinnati Educational Justice Coalition attended the school board meeting on Monday to distribute copies of the AROS report and testify to the board about their opposition to school takeovers. Read their press release here.

CHICAGO
Today is the end of the second week of a hunger strike led by parents, teachers and community members in Chicago to save Dyett High School, the last open-enrollment public school in the Bronzeville neighborhood. As the strikers' physical conditions worsen, their struggle is gaining national media attention and hundreds of advocates joined the Chicago strikers for a 1-day solidarity fast on Tuesday. Read the community-driven proposal to revitalize Dyett here, and check out some of the press these organizers have gotten in the The Washington Post, Chicago Tribune, CBS, Education Week and International Business Times. Follow #FightforDyett for the latest updates.

Don't miss this powerful op-ed by one of the hunger strikers, Jeanette Taylor-Ramann, who despite never wanting to be in the limelight has found herself driven to put her body on the line. She writes: "I now want children in this city and country to know that there are people out there fighting, willing to go hungry – for them." 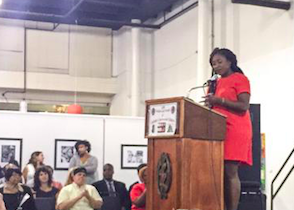 NEW ORLEANS
On the heels of launching their KatrinaTruth.org website last week, The Advancement Project and Friends and Families of Louisiana's Incarcerated Children held a memorial event and panel discussion Thursday night in New Orleans. Both the website and the discussion focused on how the city's recovery since Hurricane Katrina has left communities of color behind across all aspects of their daily lives, particularly when it comes to access to quality public schools, jobs, housing and political power. Check out pictures and discussion from the event on Twitter with #KatrinaTruth and #GulfSouthRising.

MISSISSIPPI
Organizers with the Better Schools, Better Jobs ballot initiative campaign in Mississippi are continuing the fight for fair school funding with an ongoing series of forums across the state. They are rallying support for Initiative 42, which, if passed in November, will require the legislature to fully fund the state's public schools. Check out pictures from the forums on Twitter with #Init42 and read an op-ed from MS principal and former history teacher Ben Alexander on the historical importance of the ballot initiative fight here.