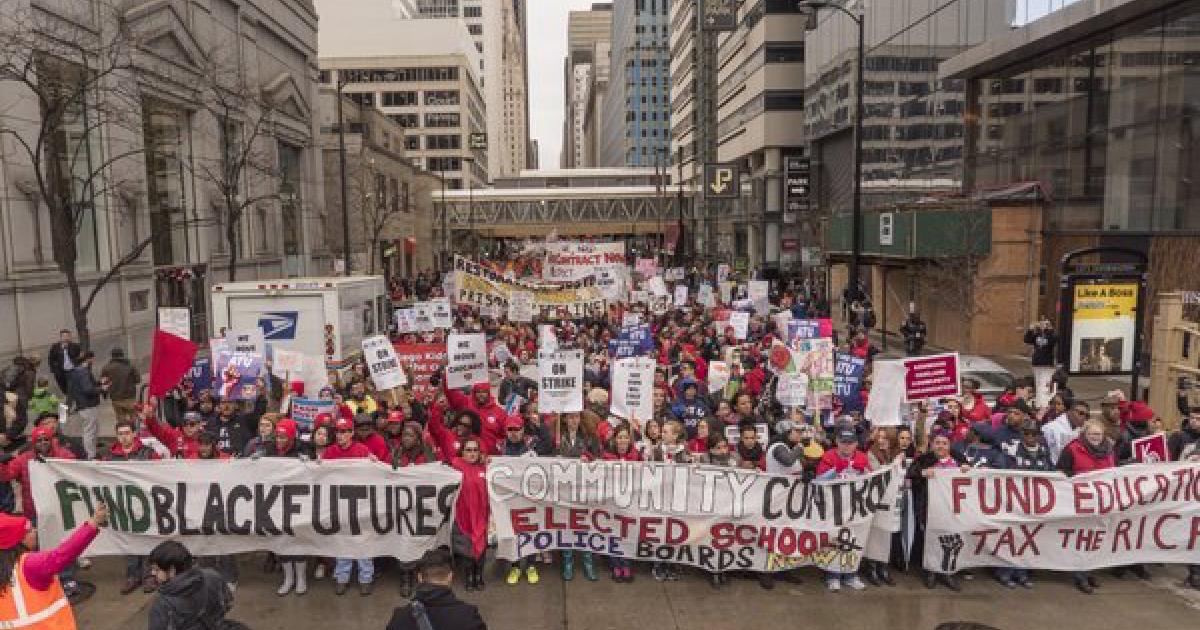 The Alliance to Reclaim Our Schools Newsletter
April 8, 2016

Welcome to our April 8 newsletter! As always, share the latest stories from your city or state with us on Twitter and Facebook. Don't forget to tell your friends and colleagues to sign up for our newsletter here. 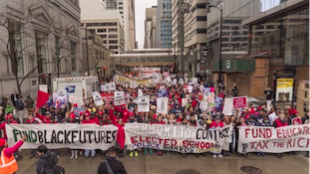 Check out more great pictures from the Chicago
strike on social media with #ShutDownChi.
Picture via @MTEA.

CHICAGO'S APRIL 1 STRIKE
On April 1, the Chicago Teachers Union went on a one-day strike, setting up picket lines at hundreds of schools in the city. Parents and students joined them at the picket lines and in a series of actions across the city throughout the day from Fight for $15 strikes at McDonald's to a children’s march by childcare providers to two actions that addressed the school-to-prison pipeline and two actions at public universities threatened with shutdown by Illinois Governor Rauner. Signs declared a #FightForFunding with a simple solution: tax the rich!

Thousands of parents, educators, students, union members, Black Lives Matter activists, Fight for $15 workers and many more participated in what turned out to be a joyful day of action, one day in a huge battle for the world class public schools all our students deserve. Check out this video with an aerial view of the thousands participating in a march downtown, and this comprehensive story from The Washington Post with a quote from AFT President Randi Weingarten.

More news from Chicago: On April 2, students protested at a Chicago Symphony Orchestra performance to urge some of Gov. Rauner's top donors to pressure the governor for more school funding. Yesterday, a coalition of 14 schools on Chicago's southwest side launched the Southwest Chicago Public School Coalition at an event at Curie High School.

Resistance is rising in the Windy City!

VICTORIES IN RACINE AND MILWAUKEE
Community organizers are flexing their muscles in U.S. Speaker of the House Paul Ryan's home district: in an April 5 victory for Racine organizers, 8 of the 9 school board candidates endorsed by Voces de la Frontera Action were elected. Huge thanks go to the 150 students with Voces who, in conjunction with the Racine Alliance to Reclaim Our Schools and the Working Families Party, organized a Get Out the Vote effort. Voces members also teamed up with the Working Families Party to canvas for alderman candidates in Milwaukee. Read more here.

NY CASINO MONEY DIVERTED FROM SCHOOLS
Public school students in New York are getting the short shrift after it was revealed that the newly passed state budget will allow a casino to dip into a pot of money set aside for public schools - to the tune of $40 million per year. Read a statement from the Alliance for Quality Education here as well as their analysis of the full state budget here. 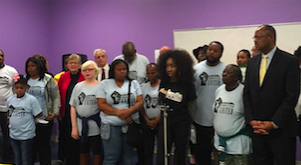 JOIN THE MAY 4 WALK-INS!
After the success of the February 17 national walk-ins, cities in the Alliance to Reclaim our Schools network are gearing up to participate in the next set of nationally coordinated walk-ins to support the schools all our children deserve. This week the Albuquerque Teachers Federation unanimously passed a powerful resolution in support of the walk-ins. It's worth reading to see how one group is tying their local fight to the national movement. Check out the Upcoming Events section below for more details about the May 4 walk-ins.

LARGE SCHOOL DISTRICTS HAVE MORE SECURITY GUARDS THAN COUNSELORS
According to a national report from The 74, 3 of the 5 largest school districts in the country have far more security guards patrolling the hallways than they do counselors advising students. The message this sends to students is unacceptable. The Alliance to Reclaim Our Schools stands with advocates and organizers across the country in the fight to end the school-to-prison pipeline. Students deserve academic support, not more cops in their schools. Read the report here.

May 4: More National Walk-Ins on the Horizon!
Mark your calendars: After the success of the February 17 walk-ins, the Alliance to Reclaim Our Schools will be organizing a second national walk-in event on May 4. We've updated our walk-in toolkit from February with new materials for the May event, and we'll have more details soon, so stay tuned!