Today, and Every Day, We Stand With the Teachers 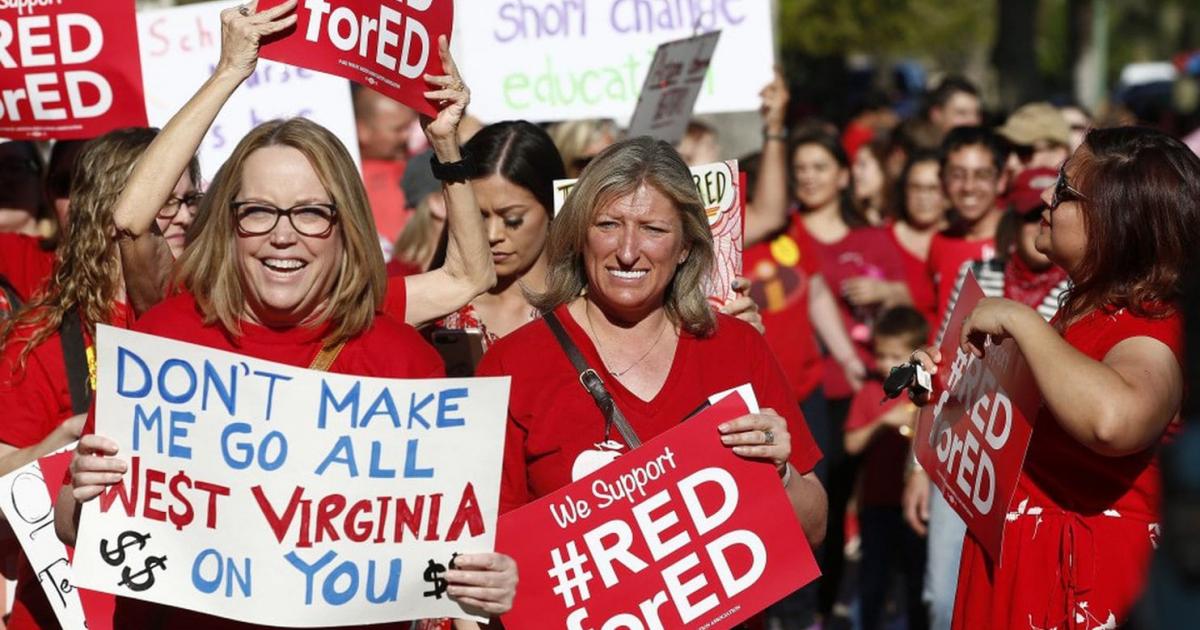 By Jay Travis and Keron Blair, co-directors of AROS

“Judicial disruption does not get any greater than what the Court does today.”  - Justice Elena Kagan.

Today, the U.S. Supreme Court joined the attack on the public goods and services—including our schools—that make our communities whole. The case called Janus vs. AFSCME is one more attempt to weaken the power of teachers, health care workers and other public sector employees. The case was funded by the same interests that are getting richer by the day through their campaign against the safety net, against the minimum wage—and against our schools.  The goal of Janus is to weaken the power of teachers and other public sector workers to organize for the public good.

When teachers in West Virginia, Oklahoma, Colorado and other states walked out of their classrooms this spring to demand greater state investment in public schools, they were not just fighting for their own self interest. They were fighting for better schools.  Their protests pulled back the curtain on decades of policy decisions that have stripped public schools of resources in order to further enrich already wealthy corporations and investors.

In Oklahoma, teachers pointed out that a decade of tax cuts, particularly to their state’s oil and gas industry giants, had reduced state revenues by more than $1 billion annually. While the corporations pocketed those dollars, public school children across the state saw deep cuts in their schools.

A full 20 percent of Oklahoma school districts were forced to go to a 4-day week because of budget cuts.  Seven hundred teacher positions were cut, while student enrollment climbed by 15,000.  And students lost access to a range of academic and enrichment opportunities—more than 500 world language classes were dropped, as were over 1,000 art and music classes.

Wealthy corporations and investors across the country have been playing the same game. It is part of a political agenda to whittle away at the public sector, eliminate regulations and allow the rich to get richer. At the forefront of this movement have been right-wing anti-government advocates like the Koch Brothers (big winners in the Oklahoma gas and oil industry), the Walton family and others.

It’s no accident that it took organized teachers to expose this get-rich-quicker agenda and how it’s hurting the rest of us. Together, teachers form one of the largest workforces in the nation. Teachers understand the impact of the right-wing agenda to defund our public schools, because they work in those schools every day—trying to address the educational, emotional and social needs of their students.  They’ve experienced the cuts first-hand. And they have also been under attack around the country because of their efforts to expose and organize against this agenda.

The #RedforEd movement pulled back the curtain on the anti-public school agenda. Today, the U.S. Supreme Court joined that agenda, demonstrating that even a supposedly non-partisan judicial body is willing to overturn four decades of precedent in order to further the assault on the public sector.

In doing so, they help all of us realize that enough is enough. We can’t let our public dollars continue to enrich the already wealthy at the expense of our schools and our communities.

It’s not just about the teachers. It’s about our students, our communities, our cities and our future as a participatory democracy.

That’s why we are standing with the teachers.

Please review this FACT SHEET about the case. Refer to this SOCIAL MEDIA TOOLKIT for sample tweets.