Statement on the Defeat of Charter Initiatives 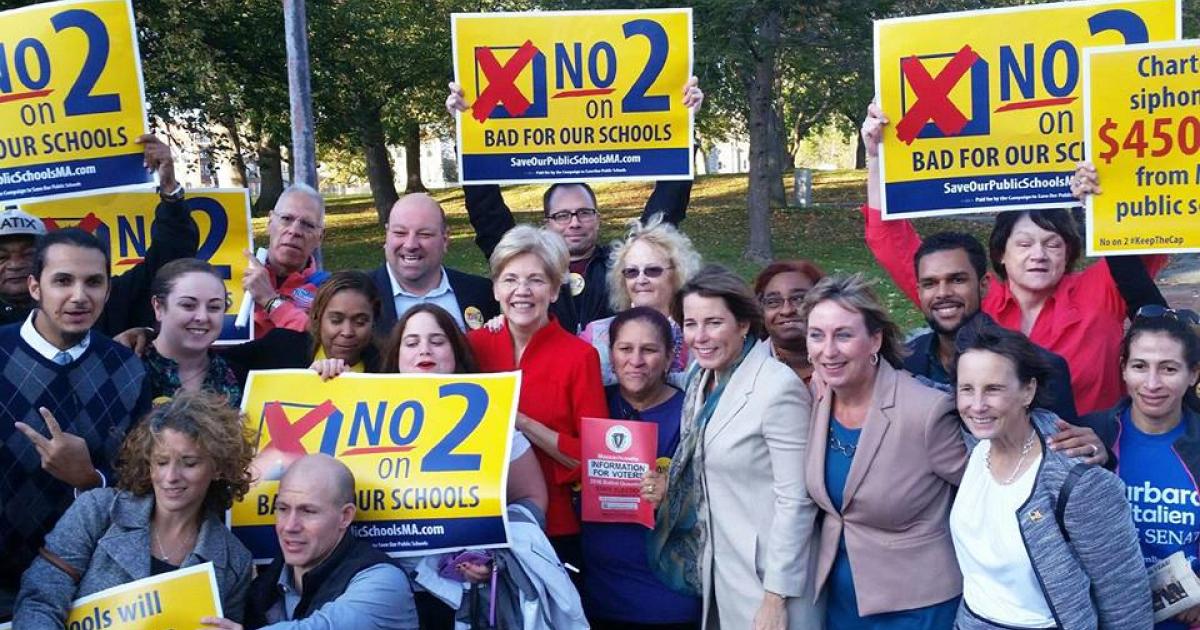 The defeat of two high-profile charter initiatives at the ballot box on Tuesday signals a growing public concern about the impacts, and rapid proliferation of charter schools across the country.

Question 2 in Massachusetts—the ballot initiative that would have lifted the cap on the number of allowed charters in the state—lost by a vote of 62% to 38%.

Key to the defeat of Question 2 was the fact that charter schools—in Massachusetts and elsewhere—siphon funds from traditional school districts, undermining the quality of education provided to their students.  In Massachusetts, the “Save Our Schools” (opposition) campaign calculated that charter schools will drain $450 million from public school systems next year, even without additional schools. Their assertion was strengthened by the release last week of a statement by Moody’s Investors Service finding that lifting the charter cap would have a “credit negative” impact on three Massachusetts cities.

Evidence is growing that across the country, the negative fiscal impact of charter schools on traditional public school students is real, and beginning to raise concerns in the general public. Studies or audits in Los Angeles, Philadelphia, Nashville and other jurisdictions have found that charters have a negative financial impact on traditional public schools and districts.

Amendment 1 in Georgia similarly went down to defeat, by a vote of 60%-40%.  In this referendum, voters rejected the legislature’s request to change the Georgia State Constitution to allow the establishment of the Opportunity School District—a state takeover district. While polling initially favored the Amendment, public mistrust grew as it became apparent that the State planned to turn the schools over to private charter management companies, removing them from local control permanently.  A 2015 report published by the Annenberg Institute for School Reform and the Southern Education Foundation offered a positive alternative to takeover, focused on investment, stronger curricular offerings, wrap-around services and other components of strong schools.

These two election results, after campaigns heavily funded by both in-state and national pro-charter interests, deal a blow to the charter school industry.  Despite 25 years of experimentation with chartering, there is yet to be strong evidence that the schools consistently out-perform traditional public schools. Instead, they have contributed to re-segregation and they show a record of under-serving students with disabilities and English Language Learners.  The rates of suspension and expulsion—particularly of Black and Brown students—are significantly higher than traditional schools.  Once touted as small innovative schools, the experiment has been hijacked by Wall Street ideologues for whom market share is the only measure and goal.

The pushback has begun.  Just last month, the NAACP called for a moratorium on new charter schools and a one-year moratorium enacted in Huntington Park, CA.  Over 70 local school districts in Ohio have submitted invoices to the State Department of Education to draw attention to the fiscal challenges they are facing in being forced to fund two competing systems of education in their districts.

With defeats at the polls in Georgia and Massachusetts, voters have now raised their voices as well.  It is one thing to experiment with choice and innovation.  And many families are happy with their charter schools.  But the relentless push for expansion is backfiring—on the industry, and on our tradition of public education.  That message was clear in yesterday’s results.