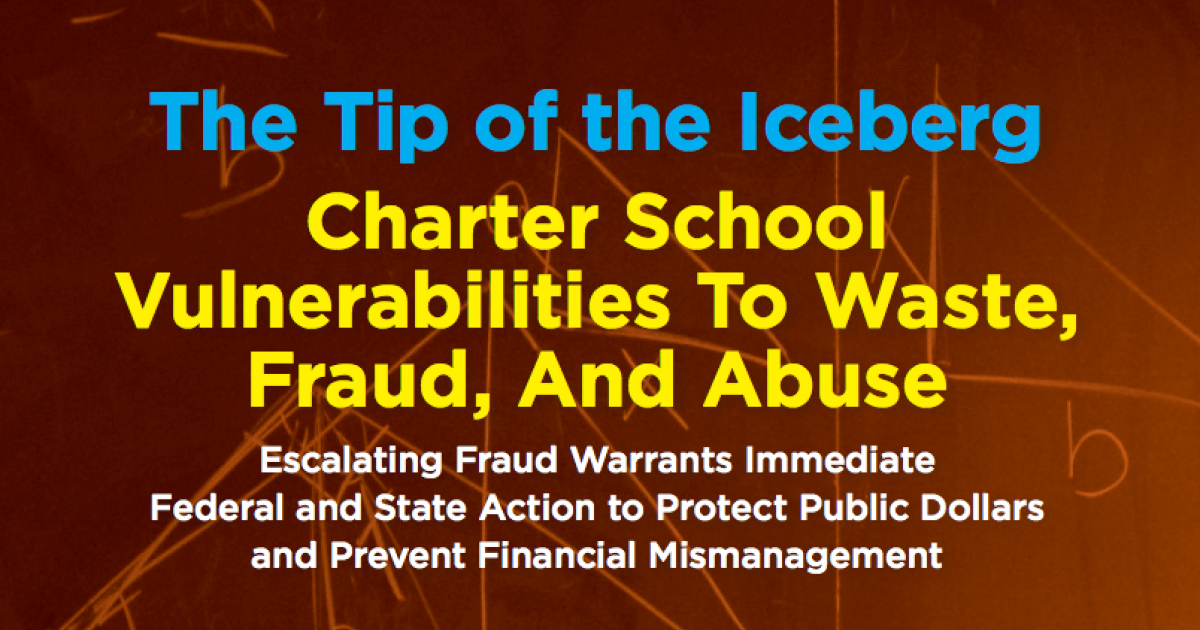 A new report by the Alliance to Reclaim Our Schools (AROS) and the Center for Popular Democracy (CPD) found that financial fraud, waste, and mismanagement by charter schools cost taxpayers more than $200 million in just 15 states—a significant increase from the more than $100 million in charter school financial fraud exposed in a similar report released by CPD last year.

“Charter schools act like they have a ‘get out of accountability free’ card,” said Jonathan Stith, director of the Alliance for Educational Justice and a spokesperson for AROS. “$200 million dollars that was supposed to go to schools and classrooms is just gone. And that's likely to be the tip of the iceberg, given the lack of transparency or standards applied to charter schools.”

“We will continue to have a charter school fraud problem until we address the root cause – the broken oversight systems that exist on a federal and state level,” said Kyle Serrette, the Director of Education for CPD. “Certainly not all charter school operators are fraudulent, but our system is not good at differentiating the sheep from the wolves in sheep’s clothing. That’s a problem, given the fact that taxpayers around the country are collectively spending over $20 billion a year on charter schools. Charter school parents, children, and taxpayers deserve better.”

Examples of charter fraud and mismanagement found by AROS & CPD include:

Washington, DC: The DC Public Charter School Board unanimously revoked the charter of Dorothy I. Height Community Academy Public Charter School—which enrolled 1,600 students across three campuses and an online academy—after the school’s founder, Kent Amos, was accused of diverting funds from the school for his personal profit. Despite evidence that Amos—who is currently being sued by the DC Attorney General—diverted more than $14 million from the school in the last 10 years, the DC Public Charter School Board pointed to their limited ability to oversee for-profit management companies, which are often intertwined with non-profit charter schools and face no requirements to disclose salaries or other pertinent information that could prevent rampant fraud.

Michigan: In April 2014, Steven Ingersoll, founder of Grand Traverse Academy, was convicted of federal fraud and tax evasion. He did not report $2 million of taxable income in 2009 and 2010. The school’s audit revealed a $2.3-million prepayment to Ingersoll’s school management company. Ingersoll then used half of a $.8 million loan for school construction to pay down some of his debt to the school. After the founder’s ouster, his daughter-in-law continued to handle the finances of the school.

Ohio: In January 2015, the state auditor released a report of the results of unannounced visits by inspectors to 30 charter schools. In nearly half of the schools, the school-provided headcount was significantly higher than the auditors’ headcount. Schools are funded based on headcount, so these inflated figures amount to taxpayer dollars siphoned away from students. Among the seven schools with the most extreme variances between reported head count and the auditors’ headcount, almost 900 students were missing, at a cost of roughly $5.7 million. Auditors identified eight other schools with troubling, but less significant variances.

Additionally, in June 2014, a grand jury indicted the superintendent and 2 board members of Arise! Academy in Dayton of soliciting and accepting bribes in exchange for awarding a “lucrative” consulting contract to a North Carolina-based company. The contract was worth $420,919 and the charter personnel received kickbacks in the form of cash, travel, and payments to a separate business.

California: In July 2014, the Los Angeles Unified School District performed a forensic audit of Magnolia Public Schools. They found that the charter-school chain used education dollars to pay for six non- employees’ immigration costs and could not justify $3 million in expenses over four years to outsource curriculum development, professional training, and human resources services that the school itself reported.

The report calls for a set of core reforms to end the hemorrhaging of public funds to fraudulent charter schools and also calls on state and federal lawmakers to act now to put systems in place to prevent fraud, waste, abuse and mismanagement.

The Alliance to Reclaim Our Schools (AROS) is a national coalition representing more than 7 million Americans who attend and work in public schools, and live in the communities most impacted by the ESEA.