Betsy DeVos Gets an F

Education Secretary Betsy DeVos was confirmed as the U.S. Secretary of Education one year ago this week.  The Alliance to Reclaim Our Schools marks this anniversary with a Report Card on her tenure.

To assess the Secretary’s leadership, we reviewed the U.S. Department of Education’s mission and purpose statements, and identified four specific roles in public K12 education on which to review her work.

In each area, it is clear that the Secretary, far from leading the agency to fulfil its mission, is taking us in exactly the opposite direction. This is not based on incompetence, but on a fundamental disdain for the historic role of the federal government in ensuring access and equity to public education for all children.

We give Education Secretary Betsy DeVos an “F” for failing to pursue the mission of the U.S. Department of Education.  Our Report Card, and an explanation of the assessment follow. 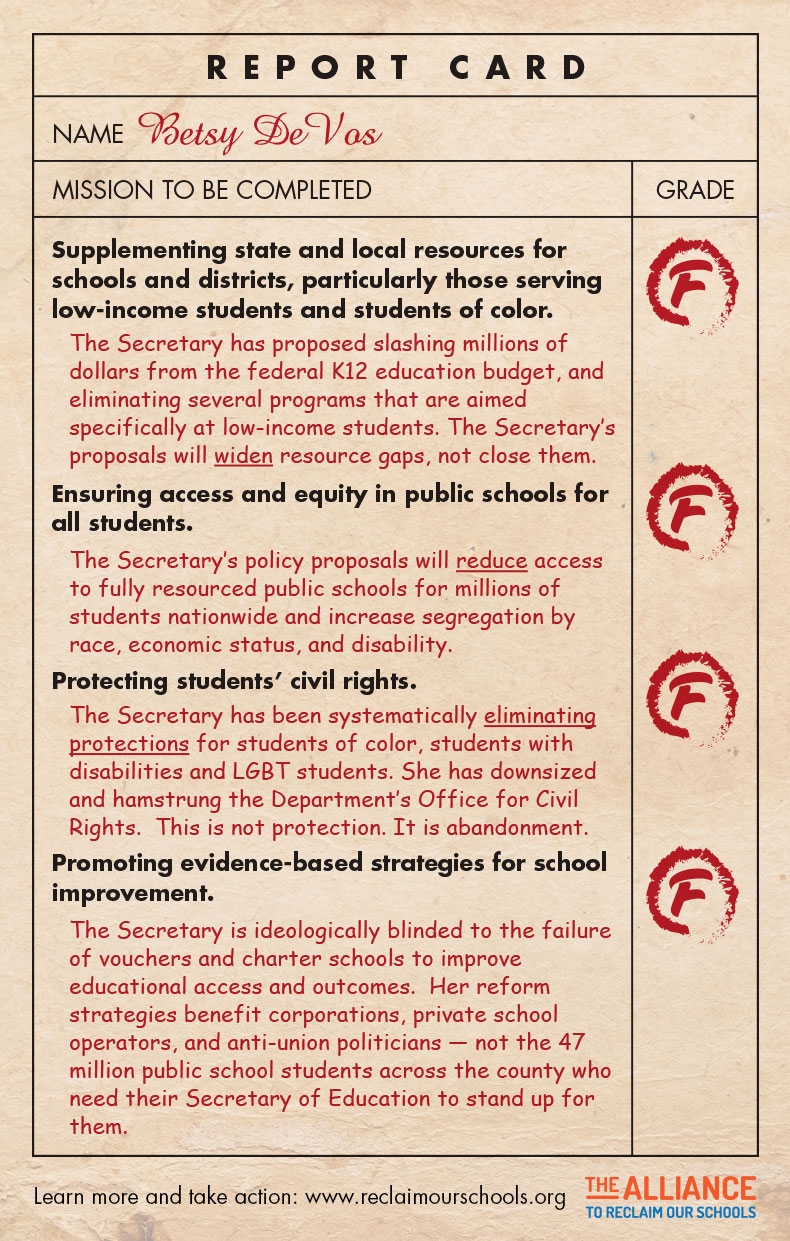 Public schools are the vehicle through which we guarantee all children a free education from kindergarten through 12th grade.  In our collective interest, we promise that poor children and rich children, students with disabilities, students of color, immigrant and non-immigrant, will have access to an equitable, quality public education, paid for by taxpayers and controlled by local communities.

Yet across the country, we continue to invest more in schools serving white children than in schools serving African American and Latino children.  And as the number of students living in poverty has risen in the U.S., state and local funding for public education has decreased in the past decade, deepening the gap between the haves and the have-nots.

Two critical and historic roles of the U.S. Department of Education (DOE) are to address these disparities, and protect students from discrimination in their educational experience. But over the past year, our Secretary of Education, Betsy DeVos has deliberately refused to fulfil this mandate. Indeed, she is taking the Department in a dangerous direction, down a path that benefits private, political and religious interests at the expense of public school children across the country. The Trump/DeVos agenda hits Black and Brown students, and low income students the hardest, threatening to undermine the quality of education in these communities.

This week, on the first anniversary of her confirmation as the head of the Department of Education, the Alliance to Reclaim Our Schools is releasing a Report Card on DeVos’ record on four specific roles of the Department.  What follows is a longer explanation of our evaluation.

The Secretary of Education—a Cabinet-level appointee—is charged with leading the DOE towards these ends.

President Trump and Betsy DeVos Are Seeking to Undermine the Department’s Historic Equity-Based Mission
President Trump’s nomination of Betsy DeVos to head the Department of Education was quickly met with widespread opposition. Indeed, Betsy DeVos was a purely ideological pick.  As with many of the President’s cabinet nominations, DeVos has repeatedly disparaged the agency (and the institution) she has been elevated to lead.
A billionaire Republican donor with no experience as an educator, administrator, parent or student in America’s public schools, DeVos rode to Washington on the heels of three decades of anti-public school activism in her home state of Michigan.3  She was a power-player in the state Republican Party, dispensing millions in personal political contributions to influence votes supporting charter and religious schools.  She founded, and/or has served as a director of several pro-voucher organizations at the state and national level. Her portfolio also includes donations to anti-gay organizations4  and a worrisome tendency to merge her personal evangelical Christian faith with the functions of government--having once asserted that she believed public policy should “advance God’s kingdom.”5
Over a million Americans called on their U.S. Senators oppose her confirmation. In the end, it took an unprecedented tie-breaking vote by the Vice President to install Betsy DeVos at the head of the DOE.
In her first year at the Department, DeVos has proven to be disinterested in, or actually hostile to her agency’s mission.  Instead of taking steps to strengthen public schools, and to ensure equity and access, she has proposed slashing budgets. Instead of fighting to protect students, she has hamstrung her own Office for Civil Rights’ ability to conduct thorough investigations of claims of discrimination and has eliminated scores of civil rights regulations.  Instead of promoting what works, she has declared her allegiance to one thing only:  privatization.
Secretary DeVos has failed to advance the mission of the Department of Education in each of the four areas noted above.

The Department of Education provides only about 8% of funding for public schools. The vast majority of school funding comes through state and local sources. But state and local funding formulas result in significant resource disparities between schools.  A key role for federal education programs is offering what the Department calls an “emergency response system,”— a means of “filling the gaps”6 where state and local dollars are not flowing proportionately to the students and schools that need them most.
This federal support is critical for schools serving poor children. Today, over half of all public school students are living in poverty.7   Yet over the past decade, state and local funding for public schools has declined.8  Federal support to ensure the schools in low-income communities have the resources they need is critical.
Within three months of taking office, Secretary DeVos announced her intention to slash funding for disadvantaged students and schools.

Secretary DeVos’ budget proposals signal her desire to dismantle many of the Department’s programs that were explicitly created to “fill the gaps” by supplementing the resources available to schools and students in poverty-stricken communities. At the same time, her support for rapid expansion of charter schools exacerbates budget crises in these same communities.

According to the Department’s website, anti-poverty legislation and the civil rights movement of the 1960s and 1970s brought about the emergence of the Department’s equal access mission.10   This mission includes ensuring that publicly funded schools are not discriminating against students by race, sex or disability.
The Secretary’s educational priority—privatization--explicitly allows public funding to go to unregulated private schools that pick and choose who they serve and contribute to increased segregation in our schools.

By promoting an educational strategy that is exclusionary and discriminatory, DeVos signals that under her leadership, the Department of Education will turn its back on the promise of equitable and accessible public education for all students.

The Department of Education has a direct interest in protecting students from all forms of discrimination.  But Secretary DeVos has been systematically eliminating protections for students of color, students with disabilities, LGBT students and victims of sexual assault.  She is reducing the capacity and the role of the Department’s Office for Civil Rights, and filling its top positions with individuals whose professional careers are antithetical to civil rights enforcement.

While the Secretary dismantles the Department’s role as a watchdog for student civil rights, she has remained silent in the face of new reports of discrimination, violence and shameful neglect in the nation’s public schools. For example:

When the U.S. Secretary of Education remains silent on incidents and actions like these, she misses an opportunity to lead by sending a message that discrimination and neglect of public school students and educators will not be tolerated.  We condemn her actions, and her failure to speak out.

Betsy DeVos has undermined faith in the Department of Education’s role as a reliable source of information on what works in public education. Instead, the Department has been transformed into an ideological advocacy organization.
DeVos ridicules those who oppose her privatization agenda, calling them “flat-earthers,”23 “Chicken Littles,” “sycophants,” and “opponents of parents.”24

“Defenders of the status quo like to paint me as a “voucher only proponent,” but the truth is I’ve long-supported public charter schools as a quality option for students.”
Secretary DeVos Prepared Remarks National Alliance for Public Charter Schools, June 13, 2017.

Call them what she may, the evidence is in on the effectiveness of charter schools and vouchers in improving educational outcomes for students:

We are continually learning more about what does work to improve both teaching and learning climates in our schools.  Sustainable, comprehensive community schools are proven to better support students—especially those coming from disadvantaged communities where external barriers to learning must be addressed along with schoolwide reform.30
It is clear that neither charter schools nor vouchers provide stronger educational outcomes for disadvantaged students.  DeVos’s singular advocacy for privatization instead of a comprehensive agenda for strengthening our public schools is undermining the role of the Department of Education as promoting evidence-based strategies for improving the content and delivery of public education to the nation’s 50 million school children.

Conclusion
The role of the Secretary of Education is to further the mission of the agency he/she leads, and to serve as the nation’s highest profile supporter of our system of public schools. Since day one, Betsy DeVos has failed to assume that role.  Indeed she show every sign of intentionally dismantling it.
While DeVos is not the first Secretary of Education to promote privatization, she has taken the effort to a new level with her aggressive efforts to promulgate and deregulate privatized schools. She has advocated slashing funds to disadvantaged students and schools and eliminating programs that support public school teachers.  She has promoted schools that explicitly discriminate or bar enrollment of certain students. She has hamstrung her own Office for Civil Rights, and curtailed its ability to adequately investigate claims of discrimination in our schools—even rescinding guidelines protecting children of color, students with disabilities, victims of sexual assault and LGBT students.  Instead, she has led an ideological crusade for privatization—a model of education reform that fails in multiple ways, to address the needs of the nation’s 50 million students.
DeVos is “playing to her base,” which is Donald Trump’s base as well—those who see gold in the “greenfield opportunity” of privatization, those intent on destroying labor unions, and those seeking to “advance God’s Kingdom” through public policy.
Betsy DeVos gets an “F” for her leadership of the U.S. Department of Education.

The Alliance to Reclaim Our Schools
The Alliance to Reclaim Our Schools (AROS) is a national coalition of organized parents, educators and students.  Together, our eleven partner organizations represent over seven million Americans, working to protect our public schools, and to demand that every public school and every student, have the resources and supports they need to succeed.  We condemn the historic and ongoing disinvestment in public schools serving African American and Latino students.  We oppose two decades of so-called education “reform” that has sabotaged these schools: creating budget crises, stripping them of teachers, counselors, school nurses, adequate facilities—and then closing them when they struggle to serve their students.  We know that austerity, incessant testing regimes to rate and rank schools and state takeovers of schools and districts are intentional strategies to undermine public support for public schools, to facilitate the transfer of tax dollars to privatized schools, and to disenfranchise parents, educators and communities.  The impacts of these strategies are felt most harshly in schools serving African American and Latino students. We assert:  Education Justice is Racial Justice. And we need more of both.

1 “The Federal Role in Education,” U.S. Department of Education website. Available at: https://www2.ed.gov/about/overview/fed/role.html

6 “The Federal Role in Education,” U.S. Department of Education.  Available at: https://www2.ed.gov/print/about/overview/fed/role.html

8 “A Punishing Decade for School Funding,” The Center on Budget and Policy Priorities. November 29, 2017. Available at: https://www.cbpp.org/research/state-budget-and-tax/a-punishing-decade-for-school-funding

10 “The Federal Role in Education,” U.S. Department of Education.  Available at: https://www2.ed.gov/print/about/overview/fed/role.html

20 “’This is Unacceptable.’ Baltimore Students Forced to Bundle Up in Frigid Classrooms,” TIME, January 4, 2018. Available at: http://time.com/5088435/baltimore-schools-cold-winter-storm/

23 “Prepared Remarks by the U.S. Education Secretary Betsy DeVos to the American Federation for Children’s National Policy Summit,” May 22, 2017. Available at:  https://www.ed.gov/news/speeches/prepared-remarks-us-secretary-education-betsy-devos-american-federation-childrens-national-policy-summit

27 “How Has the Louisiana Scholarship Program Affected Students? A Comprehensive Summary of Effects After Two Years,” Education Research Alliance for New Orleans, February, 2016.

30 “Community Schools as an Effective School Improvement Strategy: A Review of the Evidence,” Learning Policy Institute, December 14, 2017. Available at: https://learningpolicyinstitute.org/product/community-schools-effective-school-improvement-report