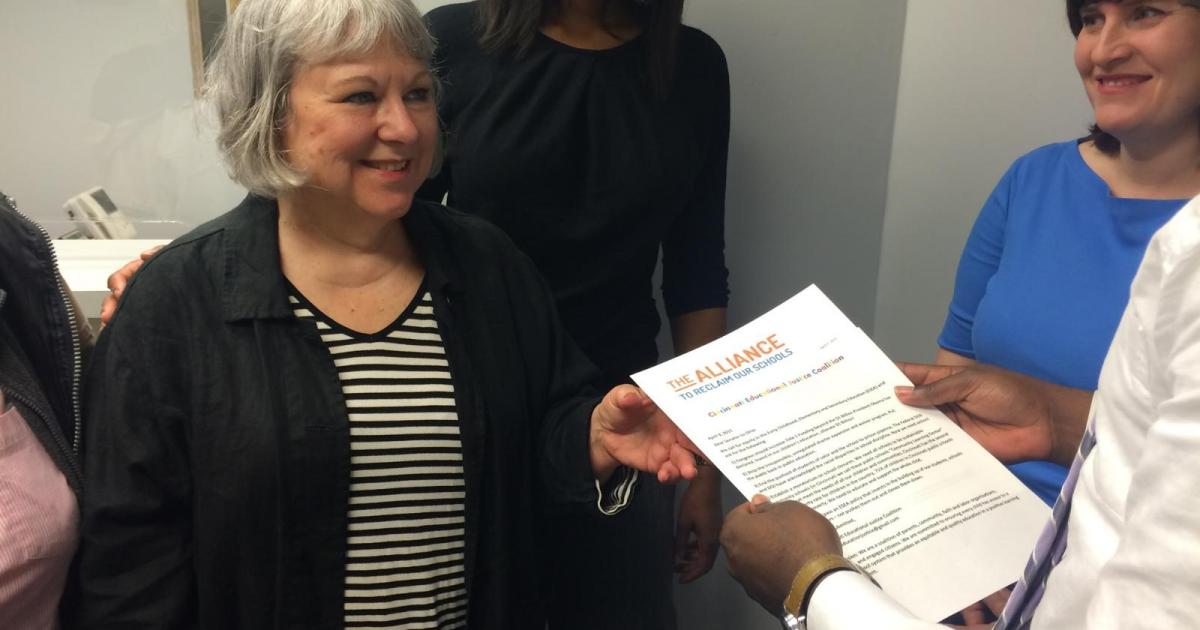 The Alliance to Reclaim Our Schools Newsletter
April 10, 2015

Welcome to our April 10 newsletter! Here is the latest from AROS allies and partners nationwide. Don't forget to connect with us on Twitter and Facebook to share updates from your city. 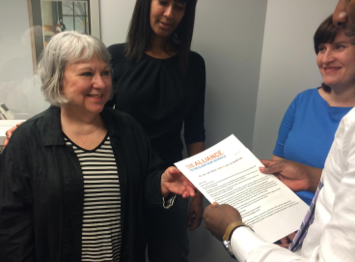 The Cincinnati Education Justice Coalition did
more than just sign on to the ESEA letter
– they hand-delivered a copy to the offices
of U.S. Senator Rob Portman. Thanks CEJC!

NATIONAL
This week, the Alliance to Reclaim Our Schools and over 100 grassroots community and labor groups released an open letter to Congressional leaders weighing in on the reauthorization of the federal Elementary and Secondary Education Act (ESEA). In the letter, we called for full funding for ESEA's Title I program, which supports schools serving large numbers of students living in poverty. We are also demanding $1 billion for the creation of Sustainable Community Schools, a moratorium on federal funding for charter school expansion, and support for implementing restorative justice practices and ending the school-to-prison pipeline. Read the letter and see the full list of signers here. And check out some of the press coverage, including The Washington Post and Politico's Morning Education.

CINCINNATI
Cincinnati Education Justice Coalition coordinator Michelle Dillingham wrote a fantastic op-ed for the Cincinnati Enquirer this week. She highlights the district's Community Learning Centers as models of successful Community Schools offering wraparound academic and health supports to students and their families. Dillingham says this is the kind of reform that federal lawmakers have the opportunity to support with the reauthorization of the Elementary and Secondary Education Act. Read her op-ed here.

NEW YORK CITY
Eva Moskowitz, founder of Success Academy Charter Schools in New York City, is under fire this week after publishing an op-ed in the Wall Street Journal mocking attempts to reform harsh and discriminatory school discipline policies. Advocates and organizers took to Twitter to call out Moskowitz for perpetuating a narrative that criminalizes students of color and ignores the growing national movement for restorative justice programs. Rather than suspending students for minor, nonviolent misbehaviors, we should be helping them learn from their mistakes and make amends without barring them from classroom. Check out some of the great discussion on Twitter here. And read this recent article from the New York Times questioning the stifling strictness at Moskowitz's schools.

PHILADELPHIA
Four leaders of the Philadelphia Coalition Advocating for Public Schools were arrested in February while engaging in civil disobedience during a contentious meeting of the School Reform Commission. The charges were recently dropped against the protesters because, as PCAPS writes on their blog, "The prosecutor, the defense attorney Larry Krasner, the Judge and even the arresting officer all agreed the courts had better things to do then prosecute advocates for public education."