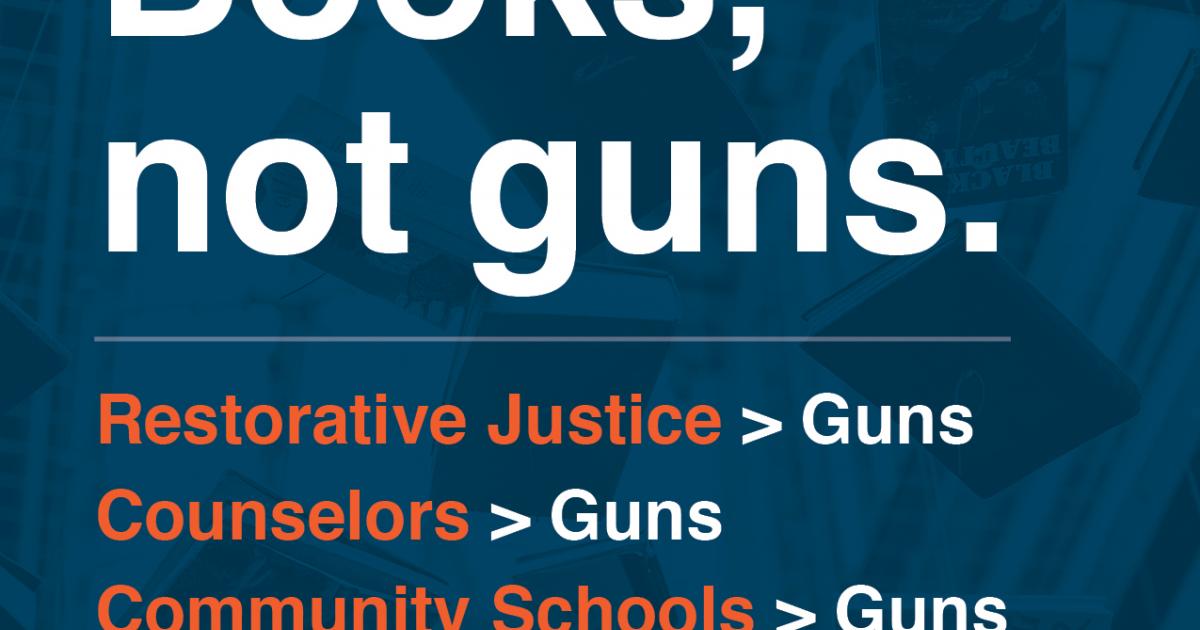 WASHINGTON—On Tuesday, The Alliance to Reclaim Our Schools (AROS), along with hundreds of community partners and parent groups, have launched a campaign for “Books, Not Guns” in America’s public schools. This campaign comes on the heels of various state and national pushes to arm educators, following the horrific Marjory Stoneman Douglas High School. Since the shooting in Parkland, Florida, legislators in at least seventeen states have introduced bills concerned with the arming of school personnel, according to tracking being conducted by Advancement Project and the Alliance for Educational Justice.

“Arming educators with weapons is the most irresponsible and dangerous thing we can do to ensure that our schools are safe and welcoming. There could be no worse suggestion. Instead of arming educators, we should be working together as a nation to properly fund public education and ensure that every school is equipped with new textbooks, restorative justice programs, school nurses, and more school counselors,” said AROS National Director Keron Blair. “For far too long, we have let the NRA and their allies turn our public schools and our communities into prisons and hazard zones. This campaign will turn the page and will unite educators, parents, students and communities in the demand for books, not guns.”

The multifaceted campaign will include a variety of digital, in-person, and community actions. A main component of the campaign is a nationwide sign-on pledge. AROS is also supporting planned actions across the country on April 20th—the 20th commemoration of the shooting at Columbine High School in Colorado. On that day, students across the country are planning walkouts and other events to demand stronger gun control. AROS organizers plan to stand in support of the nation’s young people, will do work with local coalitions and students to hold and support events already taking place on the ground.

“As latinx students, we already feel unsafe, targeted and marginalized by our national government. By arming our educators and fortifying our schools, we are just making matters worse for students like me,” said Jen Nava, a student from Kelly High School in Chicago, during the national kick-off call. “Right now, we are choosing bullets over books and counselors, and that isn’t right. I want every educator and parent to take the pledge and stop adding violence to already unsafe situations.”

Over 7,000 children are shot each year, and approximately 1,000 of those are killed by firearms each year.  The overwhelming majority of those children are injured or killed outside their school

Tags:
books
not guns
Get the latest: