Seize the Moment. Fund the Future. Fully Fund Title I and IDEA 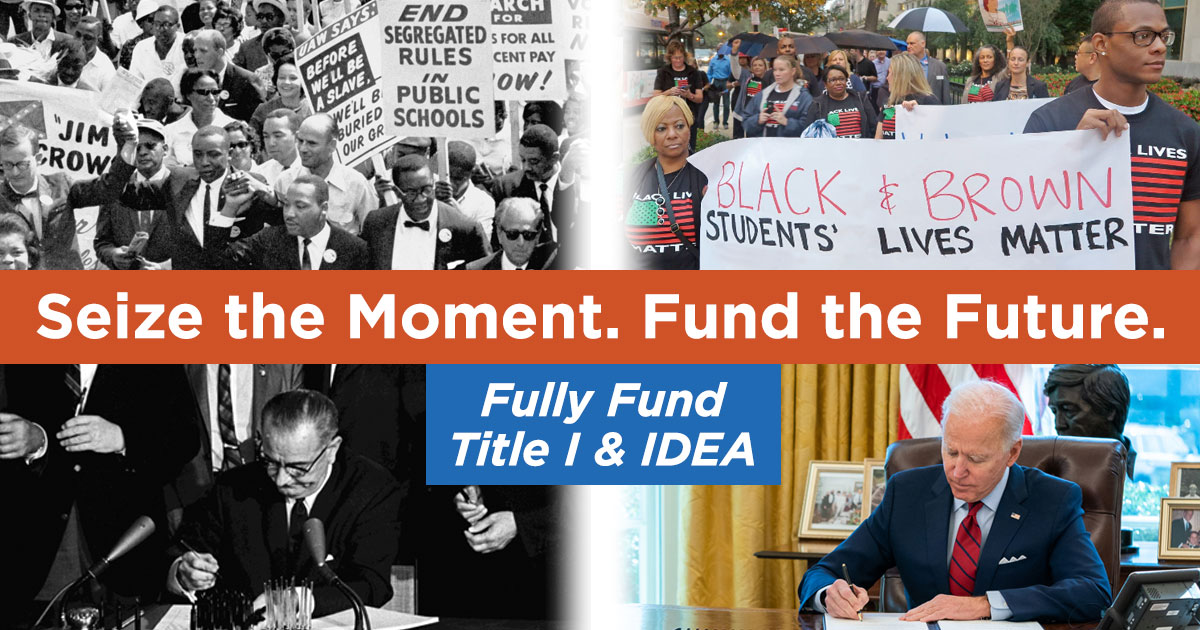 Learn more about Title I and IDEA >

Download our Title I and IDEA messaging guide [PDF] >

Fifty-five years ago, the U.S. Congress signed Title I of the Elementary and Secondary Education Act into law. This promised that students and families living in poverty would receive additional investments to mitigate the impact of poverty on educational achievement.

Since then, Title I has never been fully funded. That lack of critical investment has had a disastrous impact on poor students, their families and the communities they call home. In many cases, these students are predominantly Black and Brown. Instead of receiving the necessary funds, these young people and their parents have been subjected to devastating school closures, excessive over policing and the loss of qualified Blackand brown educators.

Despite the spotty track record of disinvestment, we have a couple reasons to organize for the full funding of Title I:

The third and most critical step to making sure that students, communities and educators have tools necessary to meet the challenges of our new world involves an unprecedented organizing effort on the local, state and federal level.

With this in mind, we invite groups from all across the movement for social justice to get involved and join our campaign to get Title I and IDEA fully funded this year! Our goal is to move millions of parents, students, educators and community members to take action. That means calling lawmakers, planning virtual rallies, meeting with members of Congress, writing letters, using social media and holding legislators accountable for their commitments to racial equity.

In truth, fully funding Title I, is, as they say, a no brainer. Over the last year, we have watched as the COVID-19 pandemic wreaked unimaginable havoc across the globe, the brunt of which landed on the poor, the vulnerable, and Black and brown people.

Here, in America, the story was a familiar one: a disaster with seemingly no connection to race or income has had the greatest impact along those lines.

Collectively, we represent millions of students, parents, educators, school-related personnel and community members. We know, better than most, what it means for the classrooms in our community to thrive with the necessary resources.

We also know that positive and progressive change does not occur because we wish for it or because promises were made. Rather, it happens because we work for it, we demand it and we bend the political arc toward action.

Fill out the form below to join the campaign and pledge to take action!